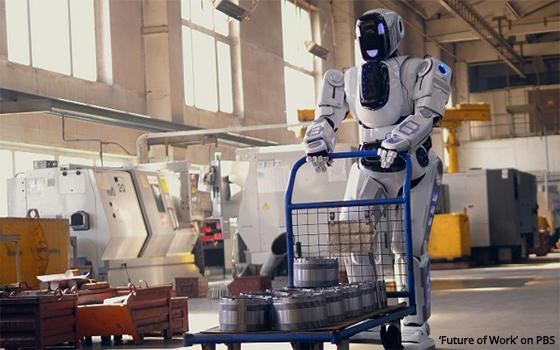 The new three-part documentary series “Future of Work” on PBS gives a viewer much to unpack and think about.

In fact, this series, which premieres Wednesday night, represents the very definition of “thought-provoking” -- some positive and some negative.

Concerning the latter, I disagreed with some of the assertions made in the series premiere I previewed for this blog -- subtitled “The New Industrial Revolution” -- because my instinctual skepticism (probably stemming from a lifetime spent in the practice of journalism) has little patience for broad, sweeping generalizations.

So, when various commentators make broad statements about the consequences of industrialization for vast populations over a period of more than 100 years, my mind says, “Wait a minute -- this seems like too broad a conclusion to be technically accurate.”

But this is a very minor complaint about this “Future of Work” series. It is so minor that it hardly rates being brought up at all because, for the most part, this series is an “Important” TV documentary with a capital “I.”

Episode One deals with a number of areas, but if it has one central thread it is the effect of modern-day technologies -- and technologies soon to come -- on the work lives of millions of Americans.

Robots, artificial intelligence, remote capabilities and mobility -- these are all contributing to an upheaval in the way Americans work.

According to this show, approximately 55 million Americans work in the so-called “gig economy” in which they cobble together odd jobs and are not connected to any corporation or employer.

Many of them live job to job in the way other workers live paycheck to paycheck, but the gig workers enjoy no company-provided benefits such as pensions and health benefits.

On this and other subjects, the show skillfully provides opposing viewpoints.

One young gig worker who depends on the odd jobs she picks up via her Task Rabbit app has nothing but praise for a work life that lets her arrange her own schedule.

By contrast, an older man reacts skeptically to her point of view when he points out that young people starting out today and then working 10 or 15 years in the gig economy will be approaching their middle age with no pension and no healthcare benefits to show for it.

Still another expert points out that “jobs” are not the same as careers, which by their nature are often more secure, and perhaps more important, more fulfilling than mere jobs.

One economist used a word I had never heard before that combined “precarious” with “proletariat” to form “precariat” -- a word describing the masses of workers who work in today’s precarious, odd-job economy.

The show even provides a healthy portion of good news along with the gloom and doom. New technologies not only put some people out of work, but they provide career opportunities too. Like other such periods throughout human history, there are tradeoffs here.

“Future of Work” premieres Wednesday at 10 p.m. Eastern on PBS.