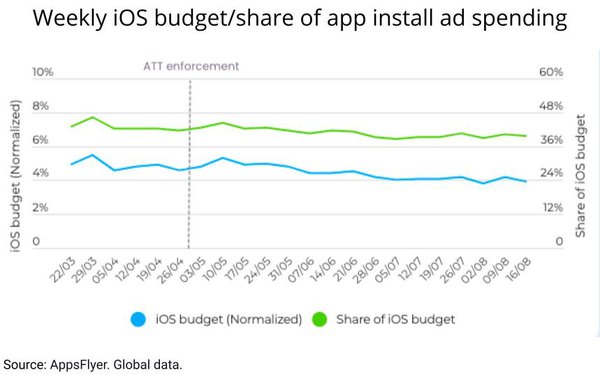 Three months into Apple’s enforcement of its App Tracking Transparency (ATT) framework, there’s some good news and bad news on its impact. The good news is that nearly half of all iOS14 iPhone users who see a prompt actually opt in to being tracked. The bad news is that more than half do not.

“The fact is that the share of consenting users is higher than expected and significant,” AppFlyer analysts write in a just-released report updating data trends on Apple’s enforcement. “This means that it has an important role to play in benchmarking for the non-consenting audiences.”

Actually, the glass is a little less full among U.S. iPhone users. While 47% of global users opt in to consent tracking after seeing a response, the rate in the U.S. is 40%.

“iOS app install ad spend has remained largely unchanged in the last couple of months,” AppFlyer analysts note in their update, adding, “Although global spend on iOS dropped 18% during this time frame (compared to pre-ATT times), Android saw declines as well with the share of iOS in cross-platform budgets dropping only 9%.”

On a country level, the impact has only been marginal in the U.S., with iOS app install ad spending falling only 4% vs. pre-ATT levels.

From an app category point of view, gaming apps saw a 3% decline in the same period, “but there were major gaps across genres,” according to AppsFlyer: “Generally, the lighter the games, the bigger the drop. As such, the share of hyper casual budgets in iOS plummeted 20%, while in casual it went down 11%. On the other side, mid-core games increased their iOS budget share by 5%, hardcore by 2% and social casino by 14%.”

In other words, it’s been a crap shoot for the gaming category.

As for non-gaming apps, AppsFly reports an overall 11% decline, while some categories -- especially education (-25%), entertainment (-23%), lifestyle (-15%) and food/drink (-17%) -- saw much more significant declines in iOS budgets relative to Android.