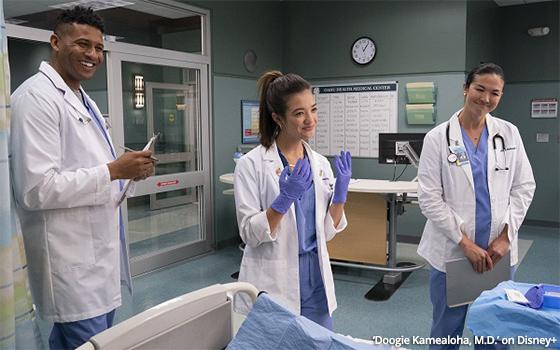 The news that someone was producing a modern-day remake of "Doogie Howser, M.D." had somehow eluded me.

But if I had heard about it at its inception, it would likely have come up for consideration for yet another TV Blog about the TV industry’s continued interest in remaking TV shows from 20 and 30 years ago.

For a while, we saw a lot of them. Remember the “Murphy Brown” reboot? You can be forgiven if you forgot it, since it did not work and was soon canceled.

Other reboots have hung around for a while. The new versions of “MacGyver,” “Hawaii Five-0” and “Magnum P.I.” come to mind. All of them were CBS shows, as was the new “Murphy Brown” too.

Happily, this new “Doogie” reboot emerges as a textbook example of how best to make one of these new versions of an old show.

The new show’s title is “Doogie Kamealoha, M.D.” (I think the pronunciation of the last name is something akin to “Cammy-aloha.”)

Like the old “Doogie Howser” series from 1989 to 1993 on ABC that made the young Neil Patrick Harris a major star, this new one is about a young genius-wunderkind who has become a full-fledged medical doctor at the age of 16.

She is a Hawaiian teen whose father runs a snack-food truck and her mother is also a doctor. In fact, Mom is the daughter’s boss at the hospital where they both work.

Dad (played by Jason Scott Lee) is a native Hawaiian. Mom (Kathleen Rose Perkins) is an Irish-Catholic raised in Philadelphia. Her Philly roots are referenced at least twice in the premiere of the series, which starts streaming Wednesday on Disney+.

The teen, Lahela, is played by Peyton Elizabeth Lee (no relation to the actor who plays her dad), and she is a real find.

Lee (seen in the above photo, center) strikes just the right balance to play a role that requires her to be both an adult -- when she treats patients as a doctor -- and a 16-year-old experiencing the kinds of growing pains all teenagers do.

The show makes reference to the old “Doogie” in several small ways, but otherwise leaves the old show back in the 1990s where it belongs and establishes itself as its own show here in 2021.

One of the ways is the opening theme music, which is, appropriately, the same melody as the old show.

Another way is a scene in which Lahela’s nickname of “Doogie” is explained by an older doctor who tells a patient that Lahela’s hospital colleagues refer to her as Doogie because her story is so much like the old “Doogie Howser” TV show from 30 years ago.

And that is the extent to which the old “Doogie Howser” intrudes on the new one (unless Neil Patrick Harris is slated for a guest cameo in an upcoming episode).

The great, good news about the new “Doogie” is that it is wholesome and entertaining. It is also, believe it or not, a moving TV show.

Watching it for this TV Blog last week made for one of the most pleasant workdays I have experienced in quite a while, where the viewing of new upcoming shows is concerned.

It is another feather in the cap for Disney and its streaming service.