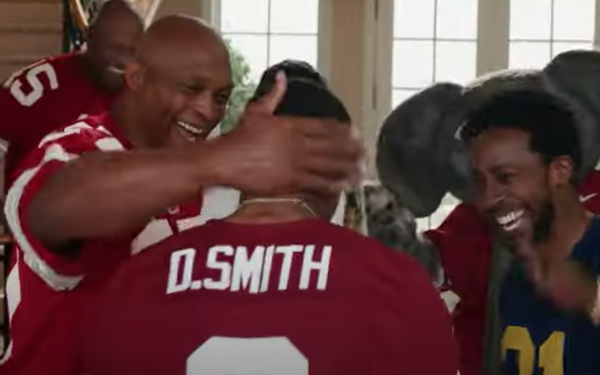 Back for its 11th season of “Heisman House” college football spots, Nissan found a new source of inspiration for creative: fan-generated tweets.

The automaker is launching a campaign with 10 spots, up from the usual six, says Allyson Witherspoon, vice president and U.S. chief marketing officer, Nissan.

“Our creative juices were flowing and that’s how we got to this amount,” Witherspoon tells Marketing Daily. “We had a ton of storylines that we wanted to tell and we were able to make it all work.”

Creating with agency partner TBWA\Chiat\Day New York, Nissan scoured a decade’s worth of Twitter posts referencing “Heisman House” and selected the most creative and humorous among them to serve as a basis for the campaign.

One spot features the Nissan@Home service, where consumers can buy vehicles from their home -- or in this particular spot, Heisman House rookie Devonta Smith can order 40 Nissan Pathfinders.

Because of the pandemic, Smith wasn’t able to experience the announcement celebration that traditionally comes with receiving the honor. So there was a lot of genuine emotion upon his arrival to the house, which was captured in the spot, Witherspoon says.

The inspiration for the spot came from a tweet by Eric Dietze of Brookfield, Wisconsin, that reads, “As part of his initiation, @DeVontaSmith_6 (’20) has to clean all of the Heisman trophies. By ancient laws of the Heismans, he needs to finish before sunset, or else.”

The 2022 Nissan Frontier is featured in “Good Hands.” Desmond Howard ponders how Devonta Smith is able to make such an amazing catch when he tosses him a water bottle for a ride in his all-new Frontier.

The spot was in response to a tweet from Kennedy Plieth of Warren, Michigan, who writes, “Desmond and Devonta MUST have a Heisman House commercial together.”

Another tweet that served as inspiration for a campaign spot came from Mitchell Allen of Houston, Texas. He writes, “Who would win a spike ball tournament in the #heismanhouse? My money is on @K1.”

The resulting spot, “Spike It,” features Bo Jackson, Desmond Howard and Baker Mayfield enjoying a friendly game of Spike Ball. Barry Sanders joins them, but there’s one problem – he has never spiked a ball before (which hearkens back to his real-life behavior when he was a player and eschewed touchdown celebrations, instead nonchalantly flipping the ball to an official.)

“It’s a great creative challenge for us to keep it fresh and keep coming up with new ideas,” Witherspoon says. “We are just amazed by the level of engagement and interest fans have in the players and with the house, so we got inspired by that.”

The spots will run on TV across ESPN, ABC, ESPN2, FOX, FS1, CBS, CBS Sports Network and during Monday Night Football on ESPN. More content will be available on Nissan’s and ESPN’s digital channels, including a 3D experience at the Virtual Heisman House as well as behind-the-scenes footage and bloopers from the shoot.