In New Eyewear Ad, Tom Brady Meets His Ancient Self 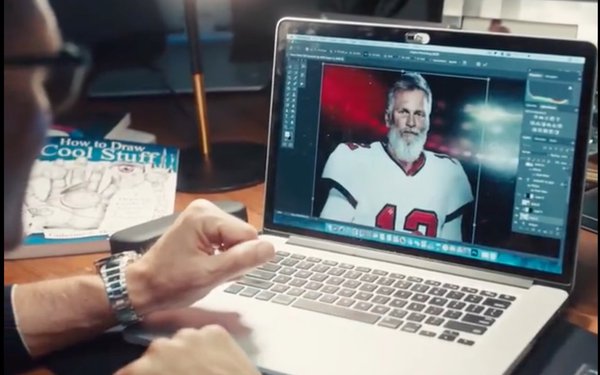 Anyone wondering what one of the oldest stars in the NFL will look like when he's even older can rest easy. Tom Brady's new ad for his Christoper Cloos eyeglass collection shows off what the legendary quarterback will look when he's fully grey, kinda wrinkled, yet still in uniform.

The reigning Super Bowl champ and QB for the Tampa Bay Buccaneers, Brady started pitching for the Danish eyewear company last year. Back in May, it rolled out the Cloos X Brady collection of biodegradable sunglasses. (The company has since transitioned to biodegradable frames for all its products.) The specs reflect Brady's "taste for minimalistic, timeless designs and a holistic approach to health and wellness."

Brady is working late behind his desk in the spot, going over what the viewer expects to be game film on his computer. A close-up reveals another image: Old Man Brady, completely grey with a full set of chin whiskers. He likes what he sees: "That beard is sick," he says.

The company worked with Shadow Lion to create the ad.  A spokesperson for the brand says the spot is running on both Brady’s and Christopher Cloos’ social channels, as well as its website.

At 44, Brady's status as the NFL's Methuselah is a source of constant sports chatter. He recently signed an extension deal with the Bucs, signaling that he will stay until 2022.

Brady's other commercial efforts include TB12, his line of wellness products that include frozen meals, supplements and workout gear; Ugg boots, Under Armour and T-Mobile.

But Cloos, started in 2017, isn't the only eyeglass company in the news. D2C darling Warby Parker released its filing for an initial public offering, finally giving the tech world a peek at its financials.

The numbers also reveal that selling glasses online is an uphill battle, even with the push the pandemic gave to ecommerce. Warby Parker says just 8% of eyewear was purchased online in 2020, up from 5% in 2019 and 2.5% when the company first launched in 2010.

It says it now has about 1% of the U.S. vision-correction market, which it estimates at $35 billion each year.