Jay Leno On His New Show, Late-Night TV And The Future Of Cars 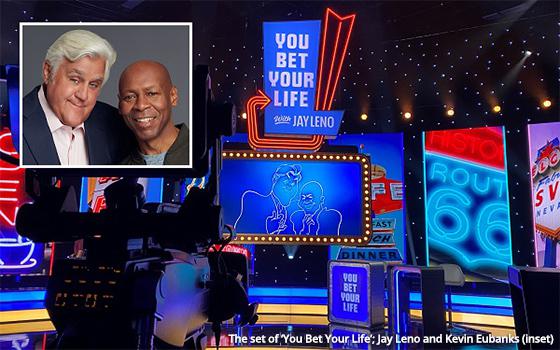 Jay Leno says he loves to work, which is one reason why he is taking on a new role as a quiz-show host this fall with a new version of the old Groucho Marx show “You Bet Your Life.”

Co-hosted by former “Tonight Show” bandleader Kevin Eubanks and distributed by Fox First Run, the show will be seen five days a week on stations representing 98% of the country starting Monday (September 13).

In a wide-ranging interview with MediaPost conducted via Zoom, Leno, 71, talked about the show, the state of late-night television and, of course, cars -- specifically, why the evolution of electric vehicles is accelerating so quickly. Here is what he had to say:

MediaPost: With all of the things you are already doing -- producing and starring in ‘Jay Leno’s Garage’ on CNBC and still performing stand-up on evenings and weekends -- why are you hosting this new five-day-a-week game show?

Leno: I thought it would be fun. I like to work. I don’t quite get not working. And it’s not nearly as much work as I thought it would be. I like that aspect of it because with ‘The Tonight Show,’ you always had to see the movie, you had to read the book, you had to listen to the album and then you had to write the monologue, which was at least six hours every night. This is like a piece of cake compared to that. [For the record: Leno and the producers of “You Bet Your Life” are in the midst of a 12-week production schedule that started in late July in which they are producing an entire season’s worth of 180 half-hour episodes.]

MP: Tell us about the show. Will it have a sponsored “secret word” feature in which a duck suddenly drops from the ceiling, as in the old Groucho Marx version of the show?

Leno: We do have the secret word, sponsored by CarGurus. We don’t have a duck, but whistles and horns blow when a contestant says the secret word. The show itself, the interactions with the contestants, is kind of like ‘Jay Walking’ [a feature from Leno’s “Tonight Show” in which he did interviews on the street with ordinary people] with the chance for people to win a couple of bucks. I like the diverse nature of the show. It’s people from all walks of life. And there’s no politics at all. I know it sounds trite and silly, but it’s amazing how much people have in common when you take politics out of the mix. I’m talking to people and we’re laughing and having a good time. As long as you don’t go there, you can actually get along quite well with people.

MP: When you were host of ‘The Tonight Show’ (and before that when you were vying for the job), you were well-known for cultivating and maintaining relationships with affiliates. Were you personally involved in this way in the sales process for “You Bet Your Life” too?

Leno: Yeah, I was, actually. I have a lot of friends who do game shows and they say, ‘I’m doing this show for eight weeks and that’s it, no publicity, I’m done.’ But I don’t. I will continue to upsell the show and interact with ‘Susan and Bob’ on the 11 o’clock news out of Ludwin, Texas -- or wherever it might be.

Leno: You can only live in the era you live in. I think Letterman and I were lucky to have done it when we did. We were sort of in the last Golden Age of [late-night]. There’s no such thing as appointment television anymore. I think we were very lucky. It’s when TV paid the highest salaries. I mean, every part of it was very lucky.

MP: What is your most recent car purchase?

Leno: I bought a new Tesla Plaid which is a pretty impressive automobile. [Prices for the 2021 Tesla Model S Plaid start at around $130,000.]

MP: As a car guy -- and one whose vast car collection is made up mostly of vintage, gasoline-powered cars -- how do you feel about the way the car industry is evolving toward electric vehicles?

Leno: Well, electric cars came first and then you had steam …  But here’s the deal: If [an EV] wins a race, game over. I mean, the Tesla right now is the fastest accelerating vehicle you can buy -- faster than any Ferrari, faster than any $3 or 4 million-dollar Bugatti. It beat the Porsche 911 GTRS around Laguna Seca [WeatherTech Raceway Laguna Seca in Salinas, California] and that’s a full-out race car. So you go, OK, this is the future. People are stunned to realize that I like electric cars. You know, they’re not over-sized golf carts. They are the most efficient things you could ask for. There’s no maintenance. There are no fluids to change. There’s no 600-mile check. There are no belts to replace. It’s pretty amazing.