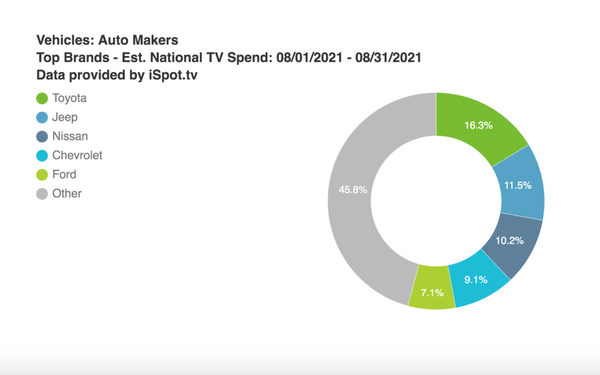 Toyota spent heavily on the Olympics in Tokyo, with nearly 70% of national TV ad spend going toward the international event that it sponsors. Preseason NFL football (2.54%) was the only other program, with more than 2% of Toyota’s spend during the month.

Automakers flocked to the Olympics in August to get in front of a nationwide audience tuning in to the Games across a variety of NBCUniversal-owned networks and platforms, said Stuart Schwartzapfel, senior vice president, media partnerships at iSpot.tv.

"The emphasis on tentpole events like the Olympics and NFL preseason didn't mean a departure from local ads, though, with auto brands actually increasing share of local impressions compared to July as they look to move inventory in specific markets,” Schwartzapfel tells Marketing Daily.

Over 23% of auto brands’ TV ad impressions in August came from sports, though reality TV actually made up 12.8% of impressions on its own. While there was an influx of sports returning last August that helped deliver a lot of impressions for auto brands, this year also has the advantage of both the Olympics and preseason NFL games -- neither of which appeared on TV last August.

Cable news TV ad impressions spiked toward the end of August between the situation in Afghanistan and Hurricane Ida. The Weather Channel, in particular, saw large TV ad impression numbers around Hurricane Ida coverage, as indicated by its appearing among the top programs as well, despite only running for a few days during the month.