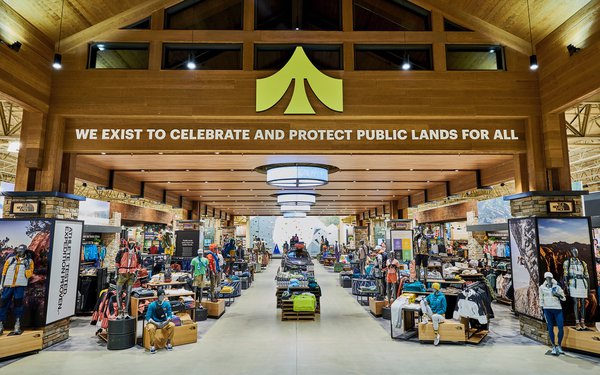 The outdoor category -- the brightest star in sporting goods these days -- is getting a little shake-up. Dick’s Sporting Goods has begun rolling out Public Lands, its new outdoor retail format. And REI, the outdoor heavyweight, is leaning into its partnership with Athleta, the Gap’s fast-growing brand known best for its yoga and workout gear.

Dick’s unveiled its first Public Lands location, set to open near Pittsburgh later this month. The company says Public Lands will carry a premium assortment of outdoor and lifestyle apparel, footwear and equipment. It’s positioning the store as an activist partner to those who love the outdoors, supporting local community initiatives that support conservation, access and equity-based efforts.

Also, 1% of all the store's sales will go to Dick’s newly established Public Lands Foundation. That includes such beneficiaries as the Allegheny Land Trust, a land conservation nonprofit in the greater Pittsburgh region; Venture Outdoors, which helps kids access nature; and Project Learning Tree, an educational initiative.

A second location is slated for Columbus, Ohio next month.

Dick’s has identified the outdoor category as one with exceptional growth opportunities, even beyond the pandemic-driven interest in outdoor exercise.

Industry experts agree. “It is undeniable that consumers have found refuge in the industry during the pandemic, the outdoor consumer base is growing, and this engagement will endure for the long haul,” writes Matt Powell, industry advisor for the NPD Group, in a recent report on the sporting goods industry. “I truly believe that the pandemic has spurred a renewed interest in and commitment to health and fitness, and this will play a role in continuing the positive momentum for outdoor products.”

In the first six months of 2021, both hiking and walking shoes outperformed the market, “with sales, on average, up nearly 50%,” Powell says.

REI, the specialty outdoors retailer and the nation’s largest consumer co-op, is also making changes. The Seattle-based company says it is expanding its relationship with Athleta. It is rolling a curated collection of Athleta products into 135 of its stores and will also sell them on its website.

The Gap, which expects Athleta to become a $2 billion brand by 2023, says the items include hiking and fitness gear, sized from 0 to 26.