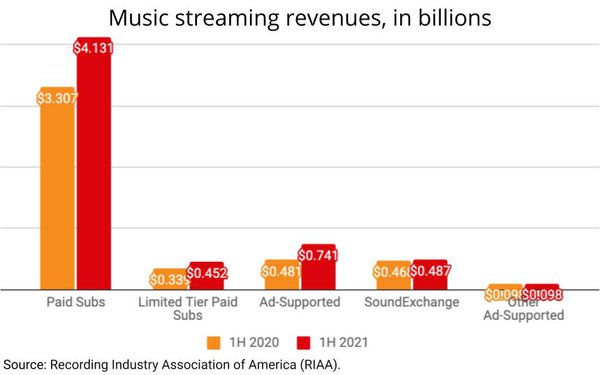 Advertising is on track to contribute more than $1 billion in revenues to the U.S. music industry this year, making it the fastest-growing source of streaming/subscription music services, according to first-half industry stats released today by the Recording Industry Association of America (RIAA).

On-demand, ad-supported streaming services generated $741 million during the first half of 2021, an increase of 54.3% over the first half of 2020.
That's the fastest rate of growth of any source of revenue for digital (non-physical recordings) music, according to the RIAA's stats.
While still only about a 12% share of overall digital music revenues, advertising has emerged as a big contributor to the overall industry growth.
Total digital revenues rose 23.8% first-half over first-half.