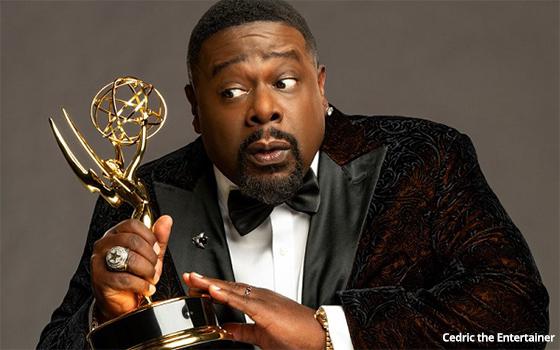 They were once among the most reliable annual shows on TV, but recently, awards shows have taken a beating.

Let’s start with the Emmys, which air this year on CBS this coming Sunday night, hosted by CBS sitcom star Cedric the Entertainer (“The Neighborhood”).

Last September’s Emmys on ABC, hosted by Jimmy Kimmel, drew a total audience that was a record low -- 6.4 million -- down from 2019’s already lowly audience of 6.9 million on Fox.

As recently as 2013, when the show was hosted by Neil Patrick Harris on CBS, the Emmys drew an audience almost three times bigger than last year’s tally. The audience that year came in at 17.63 million. It has been going downhill ever since.

And what about TV’s other high-profile awards shows? The audience for this year’s Oscars, for example, plummeted to less than half the audience it had a year earlier.

The show, held in April, drew 10.4 million viewers. A year earlier, it drew 23.64 million. Certainly, the sharp drop-off this year can be attributed to the COVID-19 pandemic and the way it disrupted the movie business.

Production and release dates were adversely affected. And theater-going itself ceased for a year.

It is not unreasonable to conclude that the result of this disruption was a significant lessening of interest in movies generally or, in particular, the industry’s annual self-celebration and awards show.

This serves as one explanation for the decline in audience for the Oscars. In short, nobody cared. Now, as the world and its movie theaters reopen, it remains to be seen whether movies and movie-going can make a comeback.

My own opinion is that the damage is done. Too much of our video and film entertainment has migrated to home-viewing on television. The result is that movies are smaller than they used to be. The same goes for the Oscars.

The Golden Globes, which honor both movies and television, also took it on the chin this year. The audience for this year’s show in February took a nosedive to an all-time low of 6.91 million viewers, down roughly two-thirds from the audience a year earlier -- 18.32 million.

Here again, it is possible that the pandemic created a kind of apathy for the nominated TV shows and movies. On the other hand, TV was supposed to be having some kind of viewing renaissance for millions of homebound Americans during the pandemic.

Whatever the case, NBC announced last spring that it was cancelling the 2022 Golden Globes over revelations that the Hollywood Foreign Press Association membership -- all 87 of them -- were not racially diverse.

As a skeptic, let me please venture the opinion that this diversity dust-up was a great cover story for canceling a telecast whose value was disappearing along with its audience.

So, that’s the picture as far as our TV and movie awards show are concerned -- huge decreases in audiences year-to-year recently, following many other years of more gradual year-to-year declines.

For anyone who believes in the reliability of trends as they relate to television audience patterns, the news is not good for the Emmys, Oscars and Golden Globes.

In the interest of science, you might say, I also went in search of audience figures for the annual Grammy Awards -- which is not a TV or movie awards show -- and found the same kinds of headlines about steep audience declines for this year’s Grammys held in March.

Specifically, this year’s show on CBS drew a total audience of 8.8 million, down significantly from 18.7 million in 2020.

The Grammys are the most visible awards in the recording industry and the annual awards telecast draws the biggest music stars in the world. The question arises: Did the pandemic and its restrictions cause millions to stop listening to music?

Or to put the question another way: Are we to blame the pandemic for the Grammy declines too?