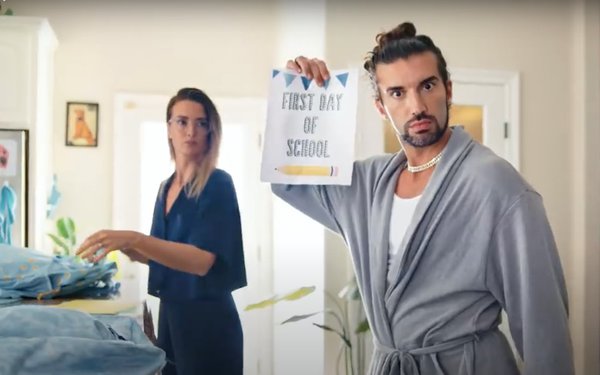 For a campaign designed to raise funds for school Parent Teacher Associations while increasing subscriptions to HP’s Instant Ink service, actor/director Justin Baldoni created a song, “Back to School, Alright” that’s being featured in two videos – one including Baldoni, his wife and two kids, the other starring parody video specialists The Holderness Family.

School PTA representatives who sign up for the “HP Pays Your PTA” program by Nov. 30 will receive a unique URL, good for 60 days, that results in a $10 HP donation to that PTA every time someone clicks on the link and signs up for the Instant Ink service, with plans that start at 99 cents monthly.  HP says it will donate up to $3 million, including a match of up to $2,000 each to the five schools who raise the most money.

The videos -- in 2:00, :60, :30 and :15 versions -- encourage parents, teachers and administrators to further raise awareness for the individual fundraisers by creating and Instagramming their own lip-synced versions of the song.

Incidentally, if a subscription service for printer ink seems a bit dated in today’s era of documents increasingly going online, HP would beg to differ.

Miranda pointed to an HP study of 1,000 parents conducted very early in the COVID-19 pandemic (April, 2020), which found that one in four parents had either bought a printer due to social distancing measures or were considering doing so.

“In that same study, 69% of parents reported increased printer usage, with a majority (66%) of parents using their printers to print educational or school-related materials for their children,” he added. “Now, a year plus later, we are seeing those early reported trends remain stagnant and in turn, a need to support today’s consumers who are still navigating the hybrid learn/work/live environment many of us are living in.”

Just last month, Miranda continued, HP launched Goodby Silverstein & Partners spots titled “Printing Just Got Smart” to highlight “how printing is now a seamless, low-lift smart experience -- similar to other smart devices so many consumers have in their homes.”