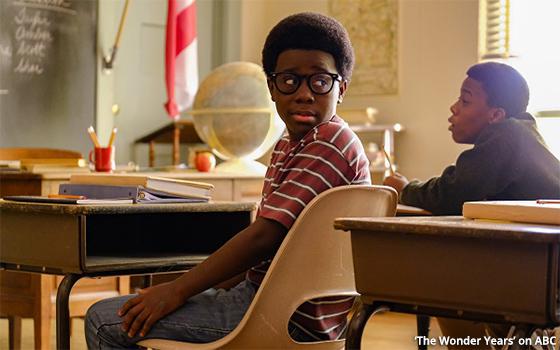 The African-American version of “The Wonder Years” coming to ABC this week is a nostalgic TV series like the original, except that this new one focuses on the not-so-rosy issue of race relations in America.

While this might seem inevitable for a TV show centered on a middle-class black family in 1968, the juxtaposition of what you might call this series’ lighthearted tone with some of the more serious social, political and historical events and subjects of the time can be a difficult thing to bring into balance week after week in a scripted half-hour made for network television.

There, we meet the Williams family -- Dad Bill (Dulé Hill), Mom Lillian (Saycon Sengbloh), teen daughter Kim (Laura Kariuki) and son Dean, 12 (Elisha Williams, pictured above). An older son, not seen, is in the military and serving overseas in Vietnam.

Dean is the show’s central character. It is through his eyes that the family’s story, centered on his own, is told -- aided by narration by Don Cheadle, who plays the offscreen role of the adult Dean looking back on his childhood from many years later.

The old show centered on 12-year-old Kevin Arnold, played by Fred Savage, now 45, who directed the pilot of the new “Wonder Years.” Kevin’s adult narrator voice was provided in the old show by Daniel Stern.

The premiere episode of the new “Wonder Years” sets the stage. As a result of efforts aimed at integrating the Montgomery schools, the all-black school in Dean’s community has been shut down, and Dean and a handful of his black peers are now enrolled in a predominantly white school named after Jefferson Davis.

They are largely shunned by the greater population of white kids at the school, except for Brad (Julian Lerner), who is Jewish and also feels like an outsider.

The show is about the family life of the Williamses, and the growing pains felt by Dean as he experiences life on the cusp of his teen years. His thoughts and feelings about friends, baseball and girls at age 12 are no different than any kid’s.

But because he is an African-American boy living in an era of social upheaval, race relations occupy a central position in his life, as reflected by almost every conversation he hears or participates in at home and school.

This makes this new “Wonder Years” markedly different from the original. And there is an irony here, perhaps unintended, in the use of the “Wonder Years” title on the new show because if memory serves, the phrase “the wonder years” originated in ads and commercials for Wonder Bread, a brand of perhaps the whitest bread in America.

In any case, Dean and his friends and family are seen going about their lives in the new show’s premiere.

Among other storylines, Dean’s little league baseball team is seen playing a game against an all-white team for the very first time, an event where the only conflict that erupts is a disagreement over coaching between Dean’s father and the team’s coach, who is also black.

However, this game just happens to be played on a fateful date in U.S. history. At the end of the game, a piece of terrible news spreads among both the white and black spectators, and the lighthearted mood that prevailed for most of the episode turns understandably somber.

Without giving away the particulars, it is quite an event to suddenly introduce into this relatively mild-mannered TV series.

One wonders if this is to be one of the show’s central plot devices -- integrating real-life events from the turbulent outside world into a show that is primarily about the inner life of a 12-year-old.

“The Wonder Years” premieres Wednesday night at 8:30 Eastern on ABC.