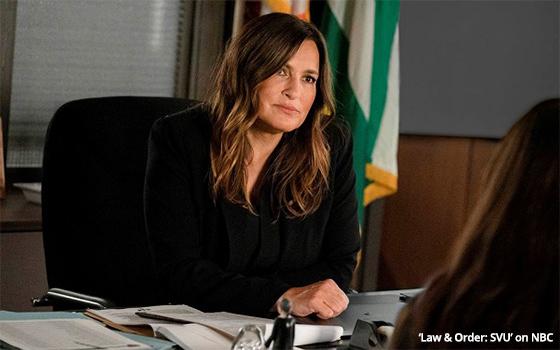 Somewhere on some TV channel in the U.S. or abroad right now, an episode of one of the “Law & Order” shows is almost certainly on TV.

Or if it is not, it is reasonable to think that that is the case, thanks to the almost unreal staying power and ubiquity that this franchise of TV shows (at least some of them) have achieved.

The “Law & Order” shows -- specifically, the three that survived long enough to enjoy a lengthy afterlife in U.S. syndication on basic cable and broadcast channels -- led the way to the sheer tonnage of off-network police and fire procedurals that are on TV now.

In many cases, considering the number of hours they account for on any given day, they are the bread and butter of so many of our cable channels and independent TV stations.

And judging by the return this week of “Law & Order: Special Victims Unit” for its 23rd season, the pipeline for “Law & Order” reruns and other shows like them is not likely to dry up any time soon.

For the record, the other two “Law & Order” shows that have made it to the promised land of perpetual profits are: the original “Law & Order,” which ran for 20 seasons, and “Law & Order: Criminal Intent” (10 seasons).

Surprisingly, a number of “Law & Order” spinoffs never made it -- more than did make it, actually (listed here with their subtitles, in the interest of brevity): “Trial By Jury,” “LA,” “True Crime” and “For The Defense.”

Another one, “Law & Order: Hate Crimes,” was announced but never produced. The jury is still out on the newest spinoff, “Law & Order: Organized Crime” starring Christopher Meloni.

That show starts its second season this week on Thursday night on NBC, after the two-hour, two-episode 23rd season premiere of “SVU.”

Long-time fans of “SVU” will find almost nothing particularly new about the first episode of the new “SVU” season. That is not a complaint, but a compliment.

One of the reasons for the longevity, or what you might call the “evergreen” nature, of the “Law & Order” shows is their adherence to a style or format of storytelling that does not change from week to week, if ever.

This characteristic makes them almost instantly recognizable and easy to digest even when one comes upon any of the “L&O” shows in mid-episode.

As the new season of “SVU” begins, Capt. Olivia Benson (Mariska Hargitay, pictured above) and her team are trying to corral all of the pieces necessary to make a human-trafficking case against a group of powerful people, including a U.S. congressman.

As always, the story has many interlocking parts and players, and all of the drama plays out on the real-life streets of New York City.

Like so many other storylines seen on “SVU” in past seasons, this one is sordid indeed, and at times the participants’ various deeds, lusts and fetishes get described in such detail that it feels gratuitous and even prurient.

But warts and all, “L&O: SVU” has made it to 23 seasons. That constitutes success in the TV business -- which, after all, is a “business” in which money is the motive. Who am I to argue with that?