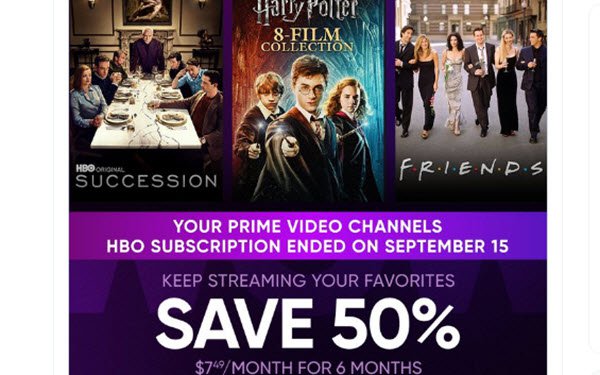 To help offset subscriber losses from pulling out of Amazon Prime video channels, HBO Max has launched a limited-time promotion that slashes the standard $14.99 price for its ad-free version to $7.49 for up to six months.

The U.S.-only offer is open through Sept. 26 for users who formerly accessed HBO through Prime Video channels, as well as all new and returning HBO Max subscribers.

The deal is available through HBOMax.com, Apple, Google, LG, Microsoft, Sony, Roku and Vizio, among other partners.

AT&T’s WarnerMedia, in the midst of a merger with Discovery Inc., pulled HBO Max from the Prime Video Channels on Sept. 15, sacrificing approximately 5 million subscribers in favor of retaining control of subscriber data/relationships and avoiding Amazon’s revenue cut.

In August, WarnerMedia acknowledged that providing access to Amazon Prime Video users solely through the HBO Max app will affect U.S. subscriber numbers in Q3. However, it said that the impact had already been built into guidance for 2021, which calls for HBO and HBO Max to reach a combined 70 million to 73 million subscribers globally by year-end.

This week, AT&T CFO Pascal Desroches reiterated that guidance, adding that most of HBO Max’s Q3 subscriber growth will come from international markets.

this week and said that most of the subscribergrowth for HBO Max during the third quarter will come from international markets.