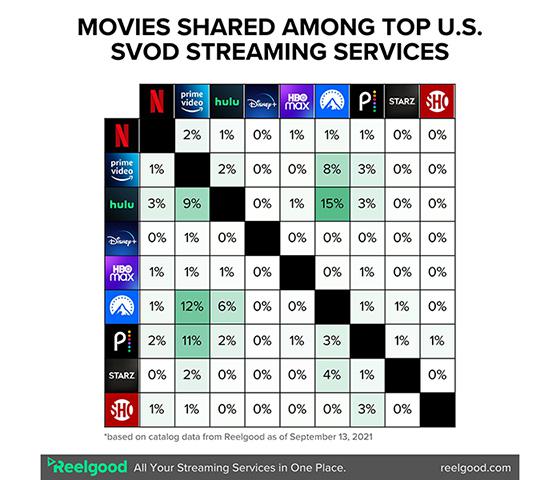 How much content overlap is there between Netflix and HBO Max or Hulu and Peacock? For example, do users need to subscribe to seven platforms? Could three or four suffice?

Overall, among any big streaming platforms -- HBO Max, Peacock, Disney+ Netflix, Amazon Prime Video -- users might share around 3% to 10% of their movie and/or TV content with any particular service.

Differentiation is what many of these services go for -- which makes sense. It is the reason NBCUniversal took back streaming rights for “The Office” from Netflix for Peacock -- and why HBO Max did the same with “Friends” -- a WarnerMedia-produced-and-owned show -- also from Netflix.

But there are bigger sharers as well. For example, Hulu and Peacock share 21%.

This makes sense when you realize that Comcast-owned NBCUniversal still has a equity stake in Hulu — with Disney being the major equity holder now. Amazon Prime Video and Showtime are the next biggest sharers at 11%.

So which service is the most unique? According to Reelgood, that would be Disney+.

When it comes to movies, Disney+ shares none of its movies with anyone else, and just 1% with one service -- Hulu, of which Disney is now a majority owner, when it comes to TV shows.

Now to be fair, Hulu does share a lot of content versus almost all other premium streamers. After a 21% share percentage with Peacock, there is 10% share with Paramount+; 9% with HBO Max; 8% with Showtime; 7% with Prime Video; and 7% with Disney+

It may be because Hulu has been around longer than virtually all streamers -- except for Netflix. So it made some early non-exclusive deals for content.

Early on, Hulu was co-owned by four major media partners -- Disney, NBCUniversal, Fox Corp. and Time Warner. In that partnership, content from those big media companies streamed on Hulu. Now, all these owners have moved to their separately controlled streaming businesses.

After Hulu, Amazon Prime Video has some high share total, but still relatively small -- 3% each for Netflix and Starz; 11% with Showtime.

All this compounds the ongoing “discovery” issues when it comes to consumer finding movies and TV content via those specific platforms. Where can we find “Seinfeld”? Coming to Netflix, we are told!