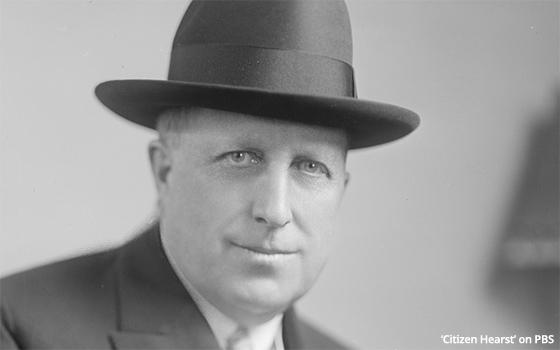 Who among our present-day media titans shall we place alongside the media moguls of yesteryear -- among them, and perhaps most conspicuously, William Randolph Hearst?

Who can compare to him today? Mark Zuckerberg (CEO, Facebook)? Jack Dorsey (CEO, Twitter)? Sundar Pichai (CEO, Alphabet Inc., aka Google)? For that matter, is Google even considered a “media” company?

Once upon a very long time ago, media moguldom was synonymous with newspaper ownership. And as much as anybody before or after him, William Randolph Hearst was the archetype of the newspaper/media mogul of his era, which stretched from 1887, when he assumed ownership of his first newspaper at the age of 24, to his death in 1951 at age 88.

The epic life story of this energetic, eccentric man gets a new going-over in a two-part, four-hour documentary that starts Monday on “American Experience” on PBS.

The title is “Citizen Hearst,” the wording inspired by “Citizen Kane,” the Orson Welles movie released in 1941 that was a fictionalized version of the William Randolph Hearst story.

The movie, for better or worse, is the prism through which many people first receive -- and then believe they know -- the Hearst story.

It should go without saying, but the Hearst story encompasses a lot more than what Welles included in “Citizen Kane.”

This four-hour PBS documentary is based primarily on author David Nasaw’s 2001 biography, The Chief: The Life of William Randolph Hearst, although Citizen Hearst had turned up many years before as the title of an earlier biography by W.A. Swanberg published in 1961.

I remember that when I read each of these books a number of years ago, I was struck by the almost incomprehensible restless energy of this man.

One minute he would be spending his days phoning his newspaper editors from his various homes in California, Chicago and New York with his instructions for the day.

And the next minute, he was suddenly off to Europe or the Middle East, or engaged in some endless project having nothing to do with his vast media holdings, such as supervising the construction of his legendary home in San Simeon, California -- a project that was never completed in his lifetime.

The documentary gets at the heart of Hearst’s ambition for his first newspaper and subsequently, the rest of the empire he would eventually build. That ambition can be boiled down to one word -- circulation.

And he proceeded in his pursuit of it starting in 1887, when he assumed the proprietorship of his first newspaper, the San Francisco Examiner, after persuading his father to sign it over to him.

In a little over two years, after remaking the paper’s style and starting the world of American newspapers on the road to sensationalist journalism, Hearst had increased the Examiner’s daily circulation from around 5,000 to more than 56,000.

“His business was about eyeballs,” sums up one of his great grandsons, Stephen Hearst, in the documentary, describing a mindset anyone in mass media can relate to.

Indeed, Hearst’s Examiner reported its growing circulation in bold type on its front page in a box that also carried the slogan, also in bold: “There Is No Substitute for Circulation.”

The thing that Hearst seemed to have in common with many of the publishing (and eventually radio and TV) moguls of his time and those that followed throughout the 20th century was the personal nature of their approach to news-gathering and publishing.

In Hearst’s world, according to this documentary, the content of his publications was designed under his hands-on management to appeal to him personally.

Fortunately, this became a formula for success for the company he built. Apparently, his tastes mirrored those of his mass readership. As a result, he made a fortune and became one of the most famous men on the planet.

Today, Rupert Murdoch, now 90, might be the last of the old-school media monarchs still taking a personal role in the shaping of the points of view that hold sway throughout his media holdings.

The truth is, the current generation of media titans mentioned at the start of this TV Blog are really nothing like the moguls of yesteryear. And neither is the media they operate either.