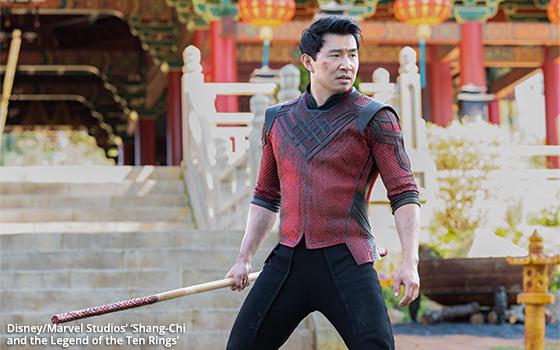 Through nine months of 2021, Walt Disney’s “Shang-Chi and the Legend of the Ten Rings’ has become the highest theatrical box-office movie of 2021, taking in $13.3 million in its fourth week, now totaling $196.5 million.

It has exceeded Disney’s “Black Widow,” which now has $183.6 million, according to estimates of IMdb’s Box Office Mojo. Third-highest box-office revenue for 2021 is Universal Pictures’ “F9: The Fast Saga” at $173 million.

“Shang-Chi” could eventually move up as the top earner for the past two years; it is just $10 million short of Sony Pictures’ “Bad Boys for Life,” released in January 2020, before the start of the pandemic in mid-March.

This year, season-to-date, national TV spending on theatrical movies -- also spurring many of those same movies on streaming services, debuted at, or around, the same time -- hit $448.7 million, according to estimates from iSpot.tv. (Warner Bros. is the biggest spender so far -- $113.1 million.)

While “Shang-Chi” is on top, it will get some major competition for the title of biggest-grossing movie of the year.

Major releases on the way for the end of the year: Disney/Marvel Studios’ “Eternals,” focusing on a new team from the Marvel Cinematic Universe, Sony’s “Ghostbusters: Afterlife,” Sony’s “Spider-Man: No Way Home,” and Warner Bros. “The Matrix Resurrections.”

And there look to be major marketing dollars backing up these releases.

For the upfront selling period, TV network ad-sales executives said there was a strong uptick in movie studio spending, as part of the sharply higher ad marketplace -- which resulted in 20% to 25% increased pricing.

Executives say much of this will begin in the fourth quarter.

Along with the summertime, the end-of-the-year holiday period is also typically a major spending window for movie-theater consumers.

After “Shang-Chi,” for the most recent week, the second-best theatrical movie box-office release was Universal Pictures’ “Dear Evan Hansen,” a filmed version of the Broadway musical. It took in $7.5 million for 3,364 theatrical locations.