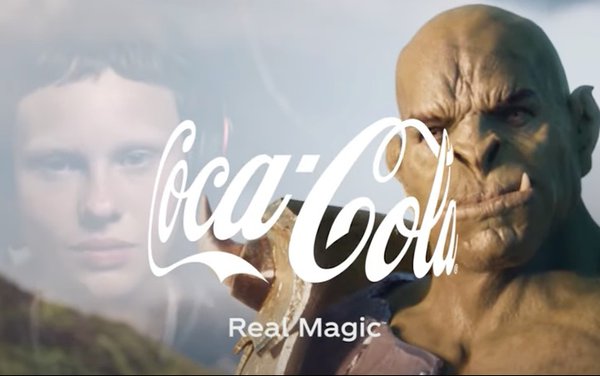 The first campaign under Coca-Cola’s new Real Magic “global brand philosophy and platform” seeks to unite the real and virtual world by engaging with online gamers via a collaboration with Twitch.

Real Magic is the first new global brand platform for Coca-Cola since 2016.

“We set ourselves a very clear, specific challenge—which was to refresh Coca-Cola’s trademark promise to unite and uplift people all over the world every day, everywhere,” Selman Careaga, president of the global Coca-Cola category, said during a virtual event today.

Careaga was joined by gaming influencers Alan Walker and Average Jonasas well as Twitch’s head of sales for the Americas, Sarah Iooss.

Titled “One Coke Away From Each Other,” the new campaign video, by BETC London, depicts Walker, Jonas and noted gamer Aerial Powers watching as a boy directs his monstrous character doing battle with other monstrous creatures.

After the boy uncaps and begins to drink from a bottle of Coke, his character “suddenly starts to act a bit different[ly] than expected,” Jonas explained.

That’s a bit of an understatement. Not only does the boy’s character throw down his weapon, the rest of the combatants do the same. Peace ensues.

“The message is about bringing people together. It’s about working together to achieve something greater than yourself and shows how we are really just one Coke away from each other,” Jonas added.

Embedding Coca-Cola in the gaming community is a first step, according to Careaga. “What we also want to do is move away from primarily broadcast communications to create an ecosystem of experiences for our consumers and people everywhere.”

Iooss said it’s “totally a myth” that brands are not welcome in the gaming space.

“There’s almost this vitalness to gaming right now, especially over these past 18 months with people at home and people sort of isolated from one another," she said. "For me, it’s really cemented this idea that gaming is shared and community-oriented instead of sort of that myth of gaming is a singular, alone activity that you do in a basement somewhere.”

The campaign video contains 25 hidden codes as part of a “code hunt” that begins on Oct. 11 in which people in select markets can win prizes—including gameplay sessions with celebrity gamers.

Through the collaboration with Twitch, gaming creators on the platform will unlock another 10 codes during livestreams on their Twitch channels.