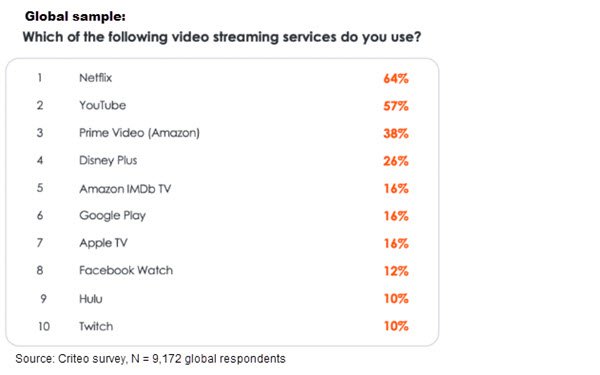 Forty-four percent of U.S. video viewers say that video streaming service ads have influenced their purchasing decisions over the past 12 months, per a just-released survey from global commerce media platform company Criteo.

More than half said they searched for featured products and services on their laptop, tablet or smartphone and visited the advertiser’s website after watching a video ad.

In addition, more than half say they find video ads entertaining and engaging.

Three in four U.S. respondents said subscription cost is their top consideration for using a video streaming service, and three in five said they are fine with watching services that are fully or partially supported by advertising to save money.

Three out of five U.S respondents agreed that the content on video streaming services is more entertaining and provides better value for their money than cable or satellite TV.

Globally, more than two-thirds of respondents agreed somewhat or strongly with both of those statements.