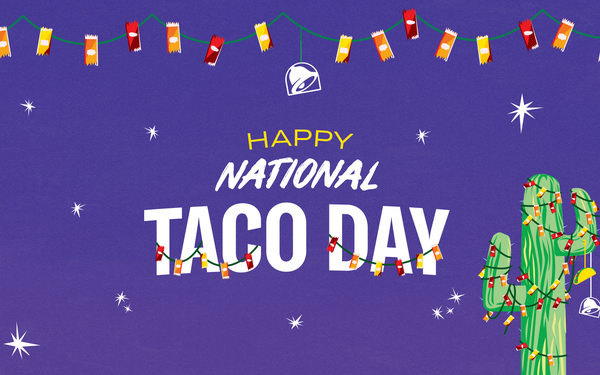 As any taco fan knows by now, today is National Taco Day. But Taco Bell, working with its agency Deutsch LA, is giving the “holiday” an international push because the restaurant chain has establishments in Latin America. Europe and Asia as well as the U.S.

The international effort includes what the brand is calling its “Taco IRL” campaign to get smart phone users to message a taco emoji to a designated number to get a free taco. The number can be accessed by QR codes and short URLs that open the user’s WhatsApp account or SMS platform to send a message with a preloaded taco emoji. Once the message is received, the sender gets a code to redeem one free taco today, Oct. 4 (only).

Taco Bell created its own custom taco emoji modeled after the brand’s Crunchy Taco menu item to be used across all assets and throughout all regions.

As part of this integrated campaign, there will also be OOH elements with QR functionality, organic and paid social, and influencer partnerships.

Meanwhile, free tacos are part of the stateside effort as well via a national social media campaign where Deutsch and Taco Bell are partnering with Discord, a community-run online chat room hub where fans can talk and hang out with friends and communities.

In their first venture on the platform, TB has created its own server-based community, named the Taco Bell Discord Server. Taco Bell is also “raiding” other Discord channels to give away tacos.

The social campaign will also host a Taco Trivia stage within the server, and whoever is left standing at the end will be crowned the “Taco Champion,” winning free tacos and receiving a special role and color on the Taco Bell Discord server.

Additional campaign elements include Easter eggs on Reddit and posts across Taco Bell owned social channels, including Instagram and Twitter, that led up today’s Discord launch.