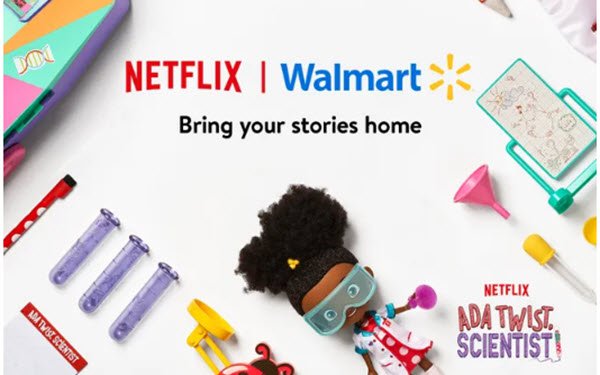 Netflix has launched another venture designed to enhance member loyalty and bring in new revenue: a merchandise hub on Walmart.com.

Netflix already has its own ecommerce shop, Netflix.shop, but this is its first ecommerce hookup with a national retailer.

The Netflix Hub -- described as the biggest online retail destination for Netflix consumer products in the U.S. -- offers a host of products tied into popular Netflix shows and movies, including some exclusive to Walmart, such as a "Stranger Things" Bluetooth cassette player and a "Cocomelon" toddler bedset with blanket, and a Geralt "grunt and grumble" talking'" plush toy from "The Witcher."

T-shirts themed to Netflix's current smash-hit series "Squid Games" are on the way, as are more toys, games, apparel and music themed to those shows and others, like "Nailed It" and "Ada Twist," according to Walmart.

As with its recent moves into games, as saturation and mounting streaming service competition from other big players begins to slow its membership growth in North America, Netflix sees the Walmart partnership as another way to increase streaming customer retention, as well as a new revenue channel.

“The real value is in reinforcing fan love for the shows and films they see on Netflix,” Josh Simon, Netflix's vice president of consumer products, told The Wall Street Journal.

“Netflix fans are passionate about their shows, and we saw an opportunity to bring those stories home in new and exciting ways,” Jeff Evans, executive vice president entertainment and toys for Walmart U.S., said in a statement. "We love it when stories transcend screens and become a part of people’s lives. Walmart has given us the opportunity to provide a shopping experience that sets a new level of innovation in the entertainment consumer products space.”

One example: "Nail It" baking kits that let the show's fans try its recipes themselves.