Production Union Sets Strike For Oct. 18 If No Deal Reached 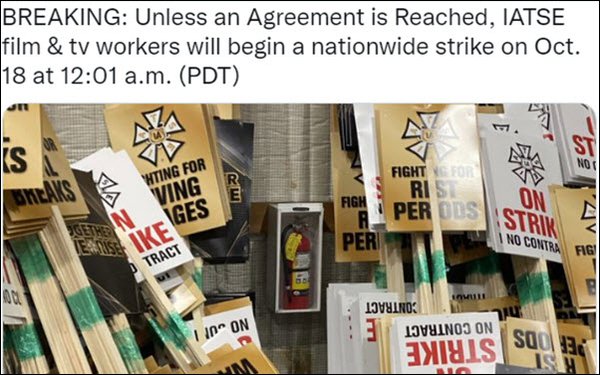 After months of negotiations, the union representing 60,000 film and television crew workers has declared that workers will go on strike on Oct. 18 at 12:01 am if a deal is not reached by then with the group that represents Hollywood studio owners, the Alliance of Motion Picture and Television Producers (AMPTP).

The International Alliance of Theatrical Stage Employees (IATSE) voted on Oct. 4 to authorize a strike, but continuing negotiations with the group that represents Hollywood studio owners, the Alliance of Motion Picture and Television Producers (AMPTP), have so far failed to result in a new contract.

A strike would shut down productions throughout the U.S., crippling entertainment companies’ ability to produce the robust stream of new content crucial to the success of their streaming services, as well as theatrical box-office revenue.

The unions are seeking improved wages for workers at the bottom of the wage scale, standardized periods of time off between shifts, meal breaks and an end to discounted pay rates for streaming service productions, among other changes.