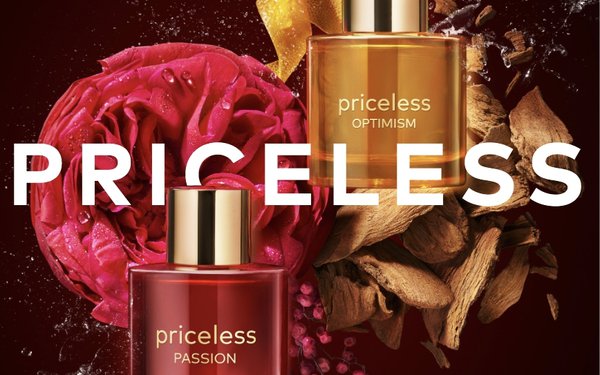 No, it’s not April Fool’s Day. And we didn’t pick up this item from The Onion. Mastercard, the payment solutions company, says it is moving into the fancy fragrance business, introducing two perfumes that personify its brand.

The line is called Priceless, and is part of Mastercard’s ongoing effort to appeal to all senses, the company says.

Priceless Passion, which comes in the brand’s signature red, draws on two rose extractions: Rose Centifolia Pays, cultivated in Grasse, and Rose Absolute from Morocco. Blended with warm woods and red berries, it has the brand’s “fiery spirit and passionate allure.”

Priceless Optimism, the yellow one, contains Sicilian Orange, grapefruit, mandarin and rhubarb, which together “lift the spirits and create an extroverted energy.”

The company previewed the new products at a fashion industry event in New York.

“We are always working to evolve our brand and have always been bullish on our multisensory approach to marketing,” says Raja Rajamannar, Mastercard chief marketing and communications officer, in an email to Marketing Daily.  “We’re determined to remain top of mind for consumers by bringing our brand to life in tangible ways: through sight, sound, taste, and now scent.”

In early 2019, the brand dropped the use of its name in many instances, arguing that just the red-and-orange circles of its logo are recognizable enough. It introduced a sonic brand during the Grammys that year. And then it launched two flavors of macarons, the French-based meringue confections. Like the perfume, they’re also named Passion and Optimism, again playing off the logo's orange and red circles.

“We hope to provide an uplifting, immersive and unforgettable experience,” adds Rajamannar.

The company says it intends to launch the fragrances early next year, with no word yet on how they will be priced, distributed or advertised.

While it’s hard to say what good credit smells like, it’s worth pointing out that a whiff of cash has worked for other perfumes. Marc Jacobs launched Daisy back in 2007, and it continues to be a best-seller. The designer has said the scent is based on his love for Daisy Buchanan, the heartbreaking heroine Jay Gatsby described as having a voice that “is full of money.”

Does that make any sense? Let’s paraphrase a line from Netflix’s “Emily In Paris”: “It’s a perfume ad. It’s not supposed to make sense.”

Mastercard’s timing may be good. While the early months of staying at home cooled fragrance sales, NPD Group reports people are back to scent shopping. “Nearly one-third of consumers are buying fragrances for themselves more often these days, and three out of four consumers feel that fragrance helps lift and enhance their moods,” writes NPD fragrance analyst Jacquelyn Wenskus, in a recent report.

The research confirms people prefer the in-person sniff test, with 74% saying they prefer to buy fragrances in stores. Some 70% say they will pay more for higher concentrate scents that last longer, and 89% say they’ve used scents in their home in the last 12 months.