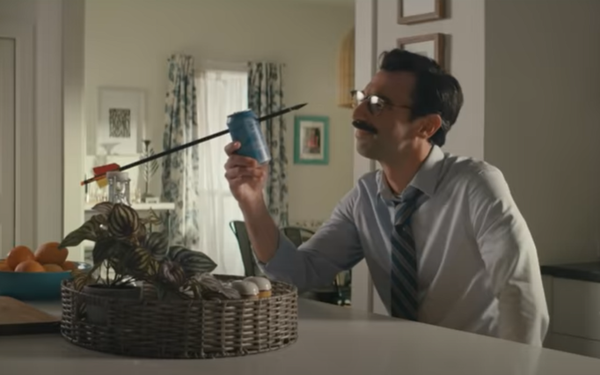 A new campaign for insurance company Ladder has a killer tagline: “Life insurance so good they’re gonna want you dead.”

To underscore this unique positioning, the insurer is running a 60-second ad via Fred & Farid, Los Angeles, showing a man returning home from work and dodging various attempts on his life.

First, he deflects a thrown knife with his briefcase, then his dog shows up with a lit stick of dynamite in its mouth, which he throws out of harm’s way. Then another flying knife comes out of the refrigerator -- and, after greeting his son, an arrow appears in the can of soda he’s holding.

The man, undaunted, ends the ad by stating “I love you too, guys!”

Part of the spot’s offbeat sense of humor comes from director Casey Storm, who has directed various spots for Hulu, Expedia and PayPal, among others. The other part is the realization that almost one in two couples with life insurance joke about taking each other out for the payout, according to a recent survey of 3,000-plus respondents.

The deadpan humor is a bit of an outlier in a category known for zany instead (Geico, Liberty Mutual and Progressive). The approach underscores the goal of the campaign, which is to cut through the noise with a memorable, relatable and differentiated campaign from the rest of the market, an agency rep said.

The ad also includes a disclaimer that says, “But seriously: Intentionally killing a policyholder will void all life insurance benefits.”