34% Of U.S. Internet Users Report Watching AVOD In Past Month 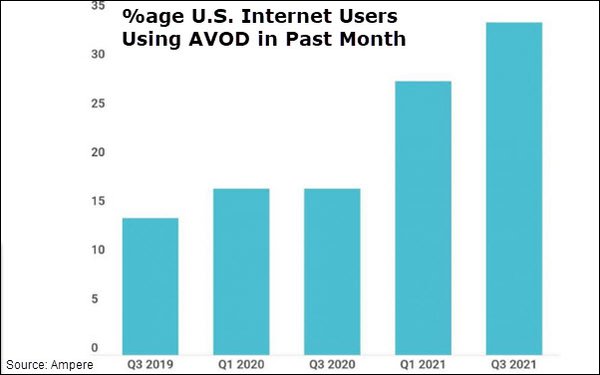 In case there was any doubt about the growth of ad-supported streaming, here’s a new stat: As of Q3 2021, more than a third (34%) of U.S. internet users reported having watched an AVOD service during the past month.

Growth among younger consumers has been particularly significant.

“The fact that younger audiences are now engaging with AVOD will be welcome news for platform owners and will make the services even more attractive to [advertising] brands,” notes Ampere analyst Minal Modha.

Modha confirms that AVOD use growth is partly due to the costs of ad-free subscription video-on-demand services, as well as the availability of more ad-supported options from major players.