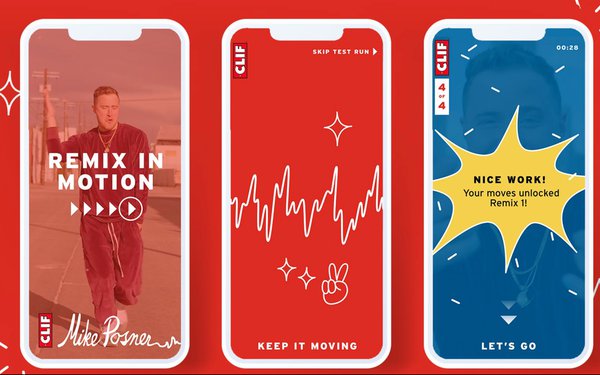 The more you move, the more music you hear. That sums up Clif Bar & Company’s mashup of physical movement, smartphone accelerometer technology and music.

It’s an extension of the energy bar marketer’s “Let’s Move The World” campaign, in a partnership with Grammy-nominated artist Mike Posner and Clif’s Remix in Motion music platform.

While accelerometers are typically used to detect the rate of change in velocity, in smartphones they detect movement and tell the screen to rotate from vertical to horizontal.

Clif is using the technology via the ClifRemixInMotion website, where scanning a bar code unlocks the premiere of Posner’s latest single, “Amor Fati”—Latin for “love of fate.”

As listeners move, they unlock the song beat by beat as well as a series of “exclusive remixes” of the tune—as explained in this video.

The initiative is designed to appeal to active people of all ages.

“We created Remix in Motion to celebrate the beauty of movement—whether it’s dancing with friends, going for a daily run, or making the world a better place so that people everywhere can feel connected in movement,” Clif Senior Brand Manager Blaire Woloz tells Marketing Daily. “Users can run, skip, dance, or move in any way they love.”

The brand chose to collaborate with Posner because of his affinity for physical activity.

“From his walk across America to spread a message about positivity and overcomingc hallenges—to his trek to the top of Mount Everest to raise money for the Detroit Justice Center—Mike has demonstrated how individual movement can have a meaningful impact,” Woloz adds.

The campaign video is running on social media platforms. Agencies involved are Edible, UEG and Reconstrukt.

Clif launched “Let’s Move The World” earlier this year with a video featuring people engaging in such activities as running, skateboarding and lacrosse—interspersed with images of Olympic soccer star Megan Rapinoe and tennis champion Venus Williams.