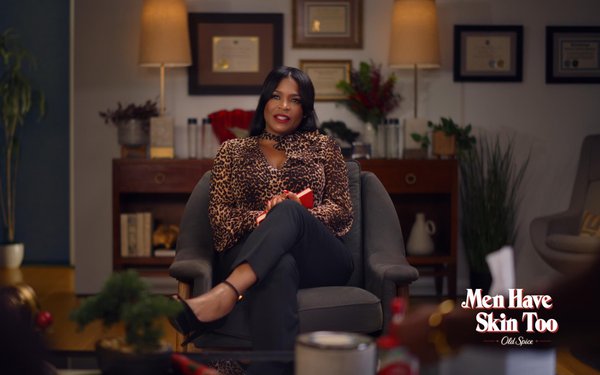 Old Spice is introducing the latest installment in the ongoing “Men have skin too” dramedy, with actor Nia Long stepping in as a couples therapist.

The ad focuses on a very sensitive Deon (“Black-ish”) Cole, who has been struggling to accept the way women in his life can’t keep their hands off his Old Spice skincare products. That includes his Old Spice wife Gabrielle (“The Game”) Dennis.

It’s the first time Long, known for “Third Watch” and “Big Momma’s House,” has appeared in an ad.

In previous chapters, poor Deon had to fend off the aggressive moves of his mother-in-law Patti LaBelle, who also constantly poached his Old Spice.

The campaign launched back in 2019 and continues to key in on consumer research that shows roughly half of all women admit to swiping their partner’s grooming products.

This spot is also a light-hearted nod to the growing awareness of mental health issues. “It’s a relevant topic right now, so we wanted to have some fun with it,” says Matt Krehbiel, Old Spice’s brand vice president. “He’s so uncomfortable with sharing that they find themselves in therapy. And Nia Long is just a fantastic character for us to bring into the series.”

The ad, created by Wieden + Kennedy, is running in 15- and 30-second versions on national TV and in digital channels.

Krehbiel tells Marketing Daily that using an episodic campaign has its challenges, given how little traditional TV its target market watches. But because the campaign has been in place for some time, “most of our target is familiar with the storyline,” he says.

“We certainly have the spots featured in TV, including sports. But we also have a ton of digital placement, including social media, TikTok, YouTube, Snap and Twitter, to bring this campaign to life. We try to meet [our customer] where he is.”

As part of the campaign, Old Spice is also introducing “Come Clean Day,” so partners can finally ‘fess up to all that product theft. A microsite features a limited-time-only promotion that gives them a chance to apologize by ordering replacement products, just in time for the holidays.

On checkout, they even get a little Old Spice swag, including hoodies, hats and T-shirts.