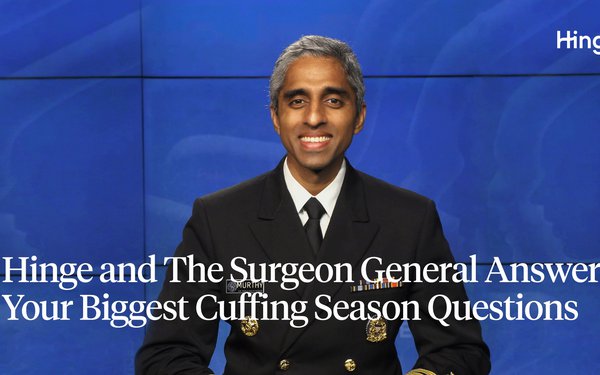 Dating used to be so much more straightforward. But these days, singles have such questions as “First kiss during COVID: lean in or turn away?” and “When can we ditch the masks? Second date? Third date?”

Hinge has now teamed with U.S. Surgeon General Dr. Vivek Murthy to answer these and other pertinent questions via a six-minute video posted today by the dating app on both YouTube and a new pandemic dating resource page.

The latter also includes 10 Hinge tips for cuffing season, that time when the weather gets colder and singles tend to couple up. Those tips, starting with…duh…using a dating app, also include suggestions like uploading one’s vaccination status, a feature Hinge introduced last June.

Indeed, Hinge says its relationship with the Surgeon General, the official’s first with a dating app, stems directly from that earlier effort to increase vaccination awareness. Since then, said a spokesperson, Hinge “has remained in touch with the government about potential opportunities to continue helping daters finding meaningful connections during the pandemic.”

As part of the current effort, Hinge is also emailing the Surgeon General video to all its U.S. users and pushing it out via Twitter and other social media. Additionally, the app says, the Surgeon General's office plans to share the video and Hinge landing page with its own network.

"Our relationships are as important as ever, and we don't have to give up on dating or relationships,” said Murthy in a statement released by Hinge. “There are tools to help make dating safer during the pandemic….You can still pursue those relationships, helping to make sure that we are healthy, strong, and happy during this pandemic and long afterward."

Logan Ury, Hinge’s director of relationship science, told Marketing Daily the app has observed three main COVID-related trends over the past 18+ months: a rise in “intentional dating,” a “fear of dating again” (FODA), and the growing acceptance of video dating.

“Intentional dating,” Ury says, finds “people becoming more thoughtful about who they are, what they’re looking for in a relationship, and who they want to be with.”

“Fear of dating again,” though, is the “biggest trend,” experienced by 51% of Hinge users.

Ury said that 44% of FODA-experiencing Hinge daters who want a relationship are “hesitant about dating because they feel like their dating skills are rusty and don’t feel their best.”

Video dating, meanwhile, may not be just a passing fad. Among some of Hinge’s stats: almost half (44%) of its users have been on a video date, and of those, 65% say they are likely to continue incorporating video chat into the dating process even as they move back into in-person dating.  Ury said that videos are seen “as a low-pressure first-step to gauge compatibility before meeting in-person.”