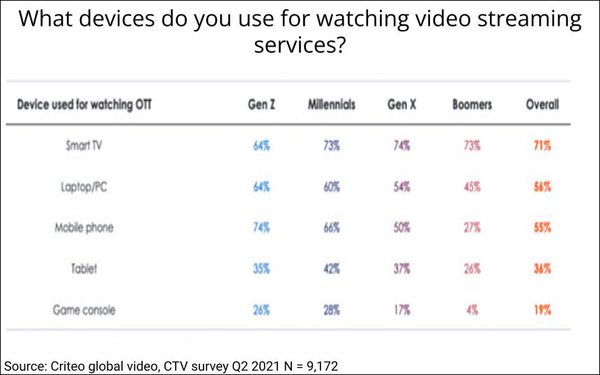 That’s considerably below the 71% who report streaming on smart TVs, but a virtual tie with laptops/PCs, at 56%.

And among Gen Z respondents, phones are the most-cited device, at 74%, versus 64% for smart TVs and computers.

Somewhat predictably, the percentages using phones for streaming decline incrementally with age, with just 27% of boomers reporting the behavior.

But smart TVs are used by roughly three-quarters of millennials, Gen X-ers and boomers alike.

Tablets use averages 36% across the age demos, with millennials most inclined to use them (42%).

Game consoles are used by more than a quarter of both Gen Zs and millennials, but by just 17% and 4% of Gen X-ers and boomers, respectively.