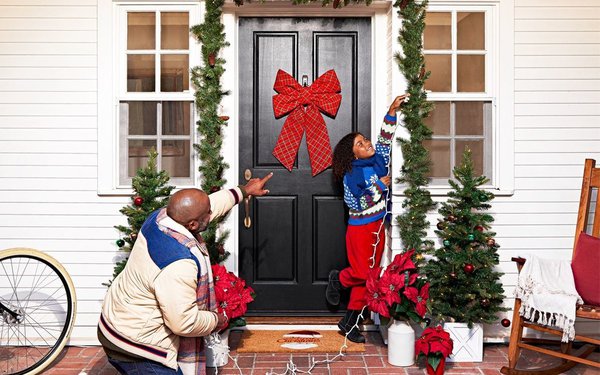 Two new forecasts suggest that Americans are ready to shop hard in the months ahead, despite plenty of concern about product availability.

That bodes well for the many retailers -- including Lowe’s, Amazon, Target and Walmart -- that have begun their heavy-duty holiday promotions well ahead of their usual schedule.

The National Retail Federation says it expects 90% of the country to celebrate Christmas, Hanukkah or Kwanzaa this year, up from 87% last year. On average, it expects them to spend $978 on gifts and holiday items. That’s on par with the previous year’s spending, but still shy of the $1,048 spent in 2019.

As was true last year, people say they are putting presents for family and friends at the top of their list, along with spending on décor and food for celebrations. Intentions to spend on non-gift purchases for themselves and the family are down. This year, about 47% say they’ll take advantage of promotions to buy non-gift items, spending about $118, down significantly from the 60% who planned on spending $162 last year.

Relentless headlines about supply-chain Armageddon seem to be making some impact, with 49% saying they plan to shop earlier–the largest percentage in the survey’s history. And 47% of the survey, which is based on 7,900 people, anticipate having trouble finding the items they want.

Deloitte’s report also signals a happy holiday for retailers, predicting a 5% gain in consumer spending, averaging $1,463 per household. (Its survey is based on 4,315 people.)

Overall, 67% expect the economy to improve or stay the same in the months ahead, and 78% say their current household financial situation is the same or better than a year ago.

But amid the waning pandemic anxiety and growing confidence, Deloitte is also detecting much more subdued celebrations in lower-income households.

Its survey also finds that 75% of consumers say they’re concerned about products that aren’t available.

Deloitte also detects a much more relaxed attitude about COVID-19, with 40% saying they are anxious about shopping in stores, compared to 51% in last year’s report.