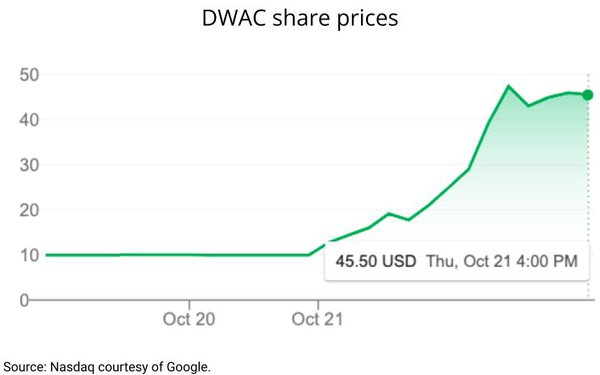 Few financial details about the media platforms were revealed in the announcement.

Trump had been banned by social-media platform heavyweights Twitter and Facebook, following the January 6 insurrection attempt on the U.S. Capitol.

Digital World was among the most popular names on Reddit’s WallStreetBets chatroom Thursday, according to reports -- an online area that pushed up the price of stocks such as GameStop and AMC Entertainment earlier this year.

The announcement said Trump Media & Technology Group had “an initial enterprise value of $875 million, with a potential additional earnout of $825 million in additional shares.” This would result in a valuation of up to $1.7 billion.

Digital World had an initial public stock offering last month resulting in $293 million in cash, according to the release. Digital World Acquisition was incorporated in late 2020, just weeks after Trump lost a reelection bid against Joe Biden.