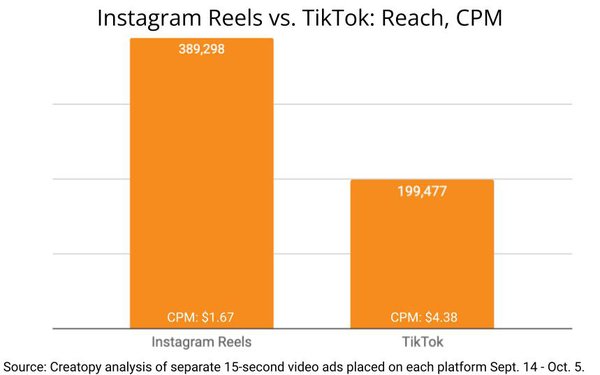 How do TikTok and Facebook's Instagram Reels compare on paid advertising performance?

Ad-design platform Creatopy ran a study between Sept. 14 and Oct.5 testing similar campaigns on each platform.

The campaigns featured the same 15-second product presentation video, ad copy and landing page. Each had total spend of roughly $1,000 and targeted 25- to-44-year-olds with similar interests living in the United States.

Before running the study, Creatopy's staff unanimously hypothesized that due to its ability to drive engagement, TikTok would be victorious.

Creatopy points out some key differences between the two platforms.

On TikTok, advertisers cannot create ads that are separate from their posts.

After they connect their TikTok business accounts to Ads Manager, they can only choose their ads from videos they have already used as TikTok posts, and the same captions in posts appear on the ads -- there is no option to personalize.

On Reels, advertisers can choose Manual Placements, then Instagram Reels, so their ads will show as Reels ads.

Facebook Ads Manager allows advertisers to distinguish between link clicks, which show the number of clicks on the link associated with the ad. Clicks on the ad do not necessarily lead to a landing page view.

TikTok Ads Manager does not separate its clicks into engagement clicks and link clicks. Therefore, Creatopy had to compare the number of clicks they received for the ads.

Creatopy also observed that a separate video it had uploaded to its TikTok profile, which only had a small number of views, jumped to more than 100,000 users after it started the test campaign. This could be “an indirect influence of the promoted ad, resulting in a boost for the other content we uploaded to our profile,” the firm notes.

One possible reason for Creatopy's Reels outperforming TikTok findings could be age demographics.

In other words, Reels could have attracted a larger pool of users for this study than available on TikTok.