Theraflu Campaign Asserts Rest For Sick Workers Should Be A 'Right, Not A Privilege' 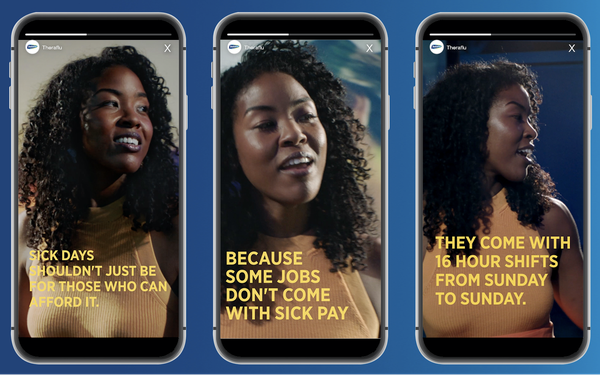 GSK Consumer Healthcare’s Theraflu has created a $150,000 microgrant program in partnership with Good+Foundation to help cover lost wages from unpaid sick days this cold and flu season. A campaign promoting the partnership was developed by Theraflu agencies Wunderman Thompson and Edelman.

The new program—which will focus on Black and Latina Moms--stems from a survey (through OnePoll) of 2,000 working Americans, nearly 70% of whom reported having gone to work while sick, often due to the financial stress of not having sick leave. The survey found that Black and Latina women are 10% more likely than white women to avoid calling in sick for fear of being reprimanded by their employer.

The ad campaign is anchored by a video featuring activist and poet Suzen Baraka reciting her poem "Some Heroes," which explains the importance of rest to recover from being sick.

“Not only are there unrelenting stigmas in taking sick time – but this research has further contextualized how many Americans are in situations where it’s financially or logistically impossible to take a single day off,” said Sameer Rabbani, marketing lead, respiratory health, at GSK Consumer Healthcare. “As a culture, we’re often focused on powering through when we’re sick, but as a cold and flu brand, we want to play a role in the solution to this problem, because rest and recovery should be a right – not a privilege.”