Ikea's Buff Bears Want You To Turn Off Your Work Phone 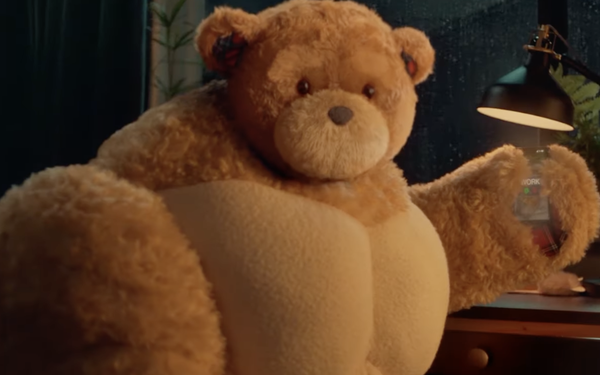 Ikea knows that when people get cozy in their dens, they want to leave work behind.  So in its latest ads, it's introduced some very buff teddy bears to defend that "my home is my sanctuary" stance, a sentiment many people have carefully nurtured for the last 18 months.

Themed “Every Home Should Be a Haven,” the spots are based on people's shifting definitions of what home feels like, says Christine Whitehawk, marketing communications manager at Ikea U.S.

"Over the last 18 months, our research shows that consumers changed their relationship with their home. They see it as a sanctuary -- but that idea of sanctuary has many different meanings," Whitehawk tells Marketing Daily.

Early in the pandemic, home symbolized a place of safety. "Now, people see it more as a place of escape, of getting away from external pressures," Whitehawk says. The team of overprotective bears, she says, "do that in a fun way."

Mother created the campaign, which is running in collaboration with U.K. markets. In addition to TV, it includes digital and social media.

Multipurpose furniture and small-space living have been Ikea's strong suit for years. But the pandemic, with the sudden rush to turn kitchens into classrooms and laundry rooms into home offices, accelerated Ikea’s credibility as a retailer that solves problems.

Early on, for instance, it helped panicky parents by releasing blueprints for the best pillow forts, which also make an appearance in the new campaign.

But at this point, consumers are kinda over looking for functional solutions, like how a rollup cart can replace a desk. They're a little more interested in having some fun, says Whitehawk.

Even as more possibilities open up, including the return to work and travel,  home continues to play an outsized role. "No matter what's happening in the world, people always return home and want to have a welcoming, safe environment for themselves or their friends or their family, "she says. "That' s a finding that been consistent with us, even before the pandemic."

Whitehawk does see two changes, however. One is a marked increase in concerns about sustainability. "It's not a fad. It's part of many people's everyday lives, so we're looking for more ways to make that sustainable lifestyle easier."

And second, she says people are much more aware of mental health and the many ways home provides a buffer to outside stressors.

Ikea's global research substantiates those shifts, with its latest annual report finding that a third of consumers worldwide feel better about their homes than they did a month ago. And of those, 40% say their home has contributed to improvements in their mental health.