Smartphones, Social Media Are The Stars Of New 'Head Of The Class' 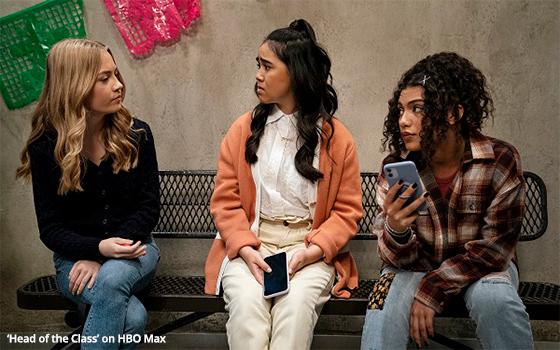 The new HBO Max remake of the old high school sitcom “Head of the Class” is a thoroughly modern comedy about teenagers.

As such, for me -- who is definitely not a teen -- previewing this show last week was like watching a group of Martians.

Like the original series (1986-91 on ABC), this new one centers on a class of gifted students who exist either outside or at least on the periphery of the school’s mainstream social life.

In the premiere episode of the new “Head of the Class,” we meet this group of brainy misfits and their new debate teacher.

She is a rookie educator not that much older than they who insists that they call her by her first name -- something an older person such as myself cannot fathom.

Not surprisingly for someone like myself who graduated from high school a long time ago, the life of these modern-day TV high school students was a life I did not recognize.

Also not surprisingly, the main difference between then and now is technological. On this show, social media and the related hardware that goes with it is by far the most central thing in the lives of these kids.

In the manner in which it has also taken hold in the real world, the very lives of these high schoolers revolve around being connected with each other via their smartphones, for good or ill.

In the show, one member of this group of nerds and relative outcasts is miraculously invited to a party thrown by the “cool” kids.

While there, he live-streams his entire experience so that he can stay connected to his friends and they can watch what he is going through. Two teachers (including the aforementioned newbie) and the school’s principal also watch online.

At the party, other kids interact with each other always with their smartphones in their hands. The party’s host habitually (and manically) posts photos and short videos of himself with various guests on social media, seemingly every few minutes.

Today, this behavior is de rigueur among young people in this age group, but it is certainly not restricted to teens. It is no wonder that this show about contemporary high schoolers is so smartphone-centric. How could it not be?

Still, diving at least a little bit deeper into the behaviors seen on the show, questions arise.

In making sure that his friends all get to observe him at this party, the boy’s live-stream of his experience is not limited to him alone.

By its nature, his live-stream captures the entire scene, including many of the other kids. As a result, he is not only volunteering to put himself under video surveillance and sharing himself with the worldwide web, but he is also putting others under the same kind of surveillance and exposure without their permission.

But in today’s world, this is what people do. No one really questions the ethics of this kind of ubiquitous surveillance and sharing it with others. Invasion of privacy? What’s that?

Another question concerns the teachers and principal who involved themselves in the life of this student by joining in the process of observing him (a minor, by the way) at the party. When I saw this, I asked myself: Don’t they have anything better to do?

Increasingly in our smartphone- and social media-centered world the answer is no. Watching others online, surveilling ourselves and sharing it with others -- these are the anything-better-to-do activities of so many in the world today, day in and day out.

As for “Head of the Class,” this show is really only suitable for other teens, or possibly Martians.