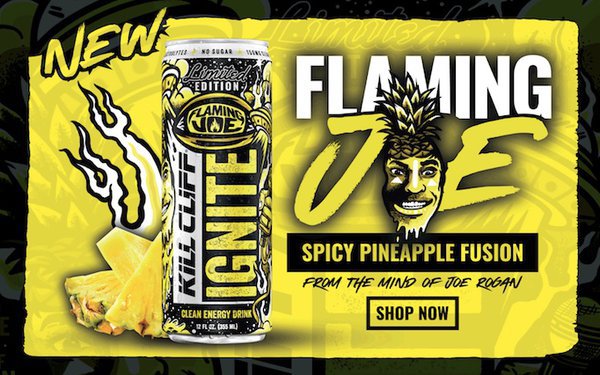 Now, the rapidly growing company has launched its own streaming TV lifestyle service, Kill Cliff TV, consisting of a free live feed, and both free and paid on-demand content.

Kill Cliff TV, Brenkus said, already offers 400 hours of programming via 10 unscripted series, including such titles as “Team No Excuses Presents The Ray Lewis Show” with the former NFL star, and “American Brain and Brawn” with the WWE’s Lucy Evans, both co-hosted by Brinkus; and “Band Meeting! with Tyler & Dave,” starring Tyler Connolly and Dave Brenner of the band Theory of a Deadman.

In addition to Kill Cliff TV’s consumer interface, the brand is working with bars and restaurants to show its linear service on their screens, Timar said in an interview with Marketing Daily.

That fits in nicely with Kill Cliff’s July deal with major distributor Southern Glazer’s Wine & Spirits to get its CBD drinks into bars, restaurants and liquor stores nationwide. “A lot of consumers like using our drink in mixes,” so Kill Cliff is working to fulfill that need, Timar explained.

Indeed, mixology was the focus earlier this week of a live Kill Cliff TV event demonstrating how to make an Old-Fashioned with CBD Orange Kush and Bärenjäger Honey Bourbon. While that event was media-only, Timar said to expect consumer-facing mixer events in the future.

Timar, a former Navy Seal, is especially proud of the brand’s association with the Navy Seal Foundation, announcing that the company has now donated more than $1 million to the group.

Brenkus, meanwhile, has Kill Cliff on a marketing tear. Prior to joining Kill Cliff last year, he had won Emmy Awards as creator, host and producer of “Sport Science” on ESPN and FSN, and served as co-host of “Soul and Science” on NFL Network. He had also been involved with ad campaigns for such brands as Ford, Nike, Gillette and Toyota.

In early October, Kill Cliff teamed up with the artist consortium Mishka on a redesign of its CBD flavor, The G.O.A.T (“The Grapest of all Time”), featuring the image of a cyclops goat. Actual masks suitable for Halloween were given away this week through Kill Cliff’s Cult Club loyalty program, launched earlier this year and already boasting tens of thousands of members.