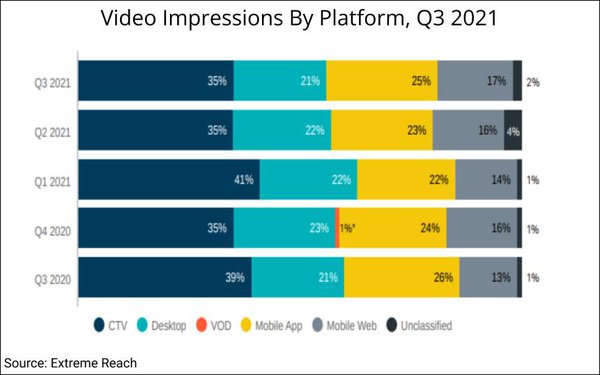 Connected TV continued to hold a comfortable lead in video ad impressions in Q3 2021, with a 35% share, according to the latest quarterly "State of Streaming" report from Extreme Reach.

CTV’s share has been 35% or higher in each of the past five quarters, and hit 41% in this year’s first quarter.

Since the pandemic broke out in 2020, CTV has become “a much larger part of viewers’ lives at a much faster pace than anyone could have predicted,” notes Mary Vestewig, vice president of digital account management at Extreme Reach.

Although overall impressions served by ER shot up 128% in Q3 compared to Q3 2020, there have been only relatively minor shifts from quarter to quarter in the shares of impressions served across the major channels — signaling that viewer habits and advertiser strategies may be reaching a new baseline, points out Vestewig.

The overall VCR average has declined since Q3 2020 (when it was 84%) — in part reflecting media aggregators’ growing share of impressions (see below). But the average rose by one percentage point in Q3, to 79%.

VCRs rose across all platforms in the quarter, and CTV’s rose two percentage points versus Q2, to 98% — a level seen only twice before in ER’s report (Q2 and Q3 2020). 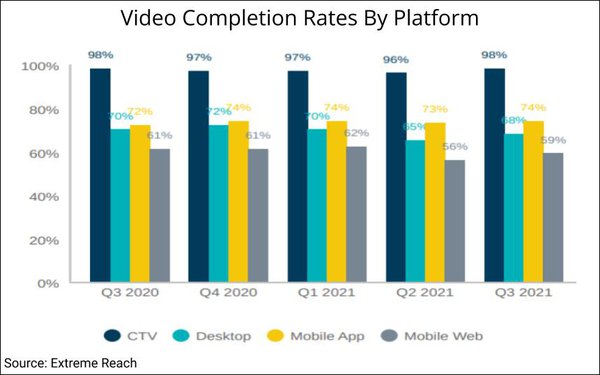 A few other highlights from Q3’s report:

But while premium publishers had the dominant share in two of those quarters, aggregators may now be starting to secure a lead position. 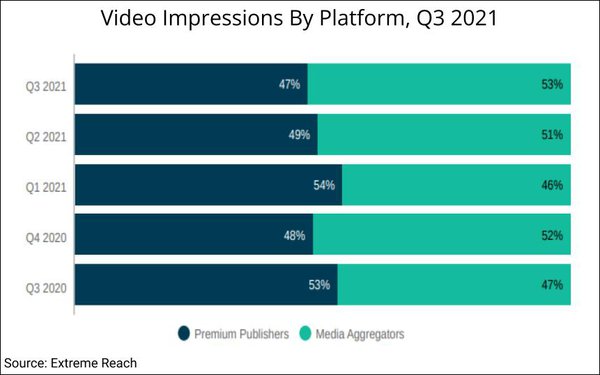 But aggregators have been uptrending, and by this year's third quarter, the positions were reversed, with aggregators at 53%.

That marked their highest share since ER began publishing quarterly benchmark reports in early 2016, and their second consecutive quarter in No. 1 position.

Conversely, the share of impressions going to premium publishers has been down-trending for the past three quarters. Q3’s 47% share is down two percentage points versus Q2. 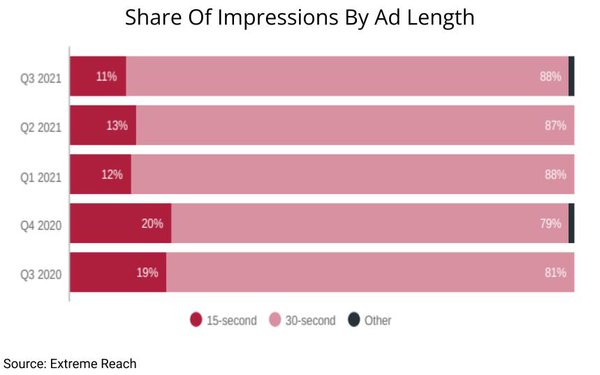 The Video Benchmarks Report compiles aggregate performance metrics for impressions served from the company's video ad server to CTV, desktop, and mobile devices. The data track campaigns for a diverse set of brands across multiple categories.