Advocacy Group Asks Brands, Grocers To 'Keep Soda In The Soda Aisle' Only 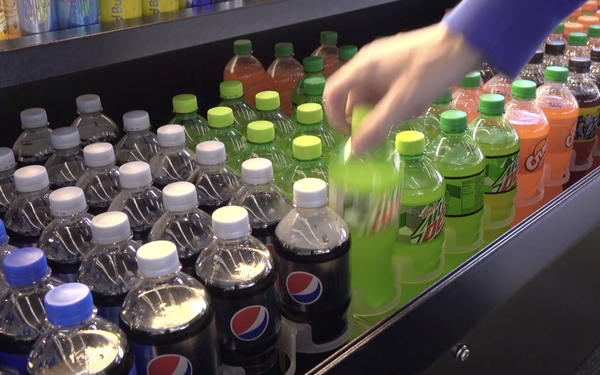 The nonprofit Center for Science in the Public Interest is pressuring CPG brands and grocers to restrict the ubiquitous in-store placement of sugary soda, punch, lemonade, and sports drinks.

It urges the nation’s top 20 grocery chains and major soda companies to stop “tempting customers with sugary drinks at every turn and threatening community health.”

This campaign video pans grocery aisles as a voiceover says that sugary drinks “are everywhere by design” and that 70% of sugary beverages consumed by kids are from grocery stores.

A second video goes beyond beverages to showcase sugary cereals—as well as candies within easy reach at the checkout.

Both videos direct viewers to a landing page where they can sign a petition to support the initiative.

“The immediate goal is creating public awareness of why we see soda everywhere in grocery stores and why the ubiquity of sugary drinks is no accident,” CSPI senior policy scientist Sara John tells Marketing Daily.

The organization cites a recent study conducted at 16 grocery stores in the Washington, D.C. area that determined “sugary drinks can be found on average in 30 locations within a store, enticing shoppers at every turn.”

According to John, “That’s because big beverage companies pay food retailers steep fees to aggressively promote these products—knowing that the more consumers see sugary drinks, the more likely it is that they’ll buy them.”

CSPI has sent letters to food retailers and drink manufacturers in which the organization references a national poll it conducted in February and March that yielded 1,300 responses from “a nationally representative sample of shoppers.”

In a letter to Albertsons Companies Inc. and other retailers, CSPI urged them to “hear the voices of your customers and create the healthier grocery store environment they demand. Albertsons can be a leader in the food industry by limiting placement of sugary drinks to a designated soda aisle and replacing them with healthier alternatives, like water and seltzer, at end caps, checkouts and free-standing displays.”

Marketing Daily reached out to Albertsons but had not heard back by deadline.

The ABA home page explains the organization’s Balance Calorie Initiative and links to a video showing beverages from Coca-Cola, Keurig Dr Pepper and PepsiCo that contain less sugar or no sugar.

“America’s leading beverage companies have been taking bold actions in product innovation and marketing of low- and no-calorie beverages, and the data shows this approach is working to help people reduce the sugar they get from beverages,” says ABA vice president of media and public affairs William Dermody Jr.

Marketing Daily also reached out to the Consumer Brands Association but had not received a response by deadline.

“Shoppers ask their grocers to provide a variety of beverages that both delight and satisfy their diverse needs,” says Heather Garlich, senior vice president communications, marketing and consumer/community affairs at the Food Marketing Institute.

“While I can’t comment on our members’ merchandising strategies, I can say that food retailers and suppliers play a key role as partners for health and well-being in the communities they serve by helping to support healthy eating patterns and meet the personal needs of consumers."