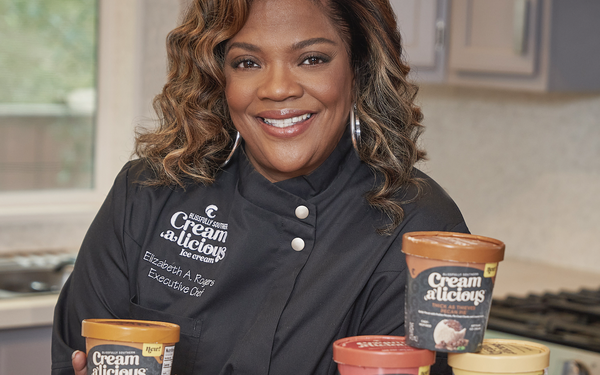 Do we really need another ice cream brand?

Actually, make that “decadent and indulgent” news for the Ohio-born entrepreneur.

Creamalicious seems to have found the right nexus of product differentiation and genuine storytelling at a time when very few retailers have been adding new products to already jammed freezer cases.

Rogers takes cakes and pastries inspired by four generations of family recipes and intertwines them with ice cream in what she calls “two-in-one” desserts. Among other results: 14% butterfat (see decadent and indulgent).

In the following interview, edited for brevity and clarity, Rogers talks about how family memories inspired her to chase her dream with Creamalicious, the challenges CPG entrepreneurs face when seeking investors, and how she plans to help other fledgling companies.

Rogers: The brand stories are authentic—about real ties, real people. It’s about family, love and better times. Think about peach cobbler and when you were a kid having dessert after dinner—or that scoop of banana pudding with your mom and dad just sitting on the porch. With Uncle Charles, everyone has that cool uncle who you look up to. We’re storytellers, like Disney. It’s the culinary Neverland.

CPG FYI: How did you get into chains like Meijer, Target and Walmart?

Rogers: They’re always looking for something new, something different. But when I first tackled this project, the first thing people said was “they’re never going to let you on the shelf. They’re going to tell you no—so don’t even go for it.”

Some retailers said “we have thousands of ice creams on the shelf and no room for anything new.” That didn't make sense to me because I’m not going to allow anyone to tell me that I can’t make my dream come true. If you dream it, you can chase that dream and make it come true. Walmart was like, “Well, you gotta start somewhere.”

CPG FYI: How have you funded Creamalicious so far?

Rogers: Pretty much by working three jobs. I was able to get one investor that really believed in me and I’m in the process of looking for more. Because we’re on our way to some really big expansion to some big accounts and going to be groundbreaking, I’m going be doing a crowd funding on TruCrowd.

CPG FYI: It’s well documented that female entrepreneurs have a hard time raising money from venture capital firms because they’re mostly run by men. Is it even harder being a Black female?

Rogers: I think so. I’ve seen a company that went to a retailer and got into all their stores and never sold one pint of ice cream. I’ve sold a few million pints in a short amount of time and I still have trouble getting investors. Even though I’m in the largest retailer in the world, there’s this hesitation. A lot of investors either don’t call you back or take you seriously. It does have a lot to do with the fact that I’m a woman and an African American as well.

CPG FYI: What is the goal of the Elizabeth A. Rogers Visionary Foundation?

Rogers: I’m trying to launch my foundation through sales of Creamalicious to help other entrepreneurs realize their greatness. There’s so many people who want to own their own business, but they’re afraid. They’re extremely under-capitalized. They can’t walk in and get loans. They can’t get investors. I want to provide financial resources so they have teams, attorneys, strategists, CPAs and things like that so they can just run their business.