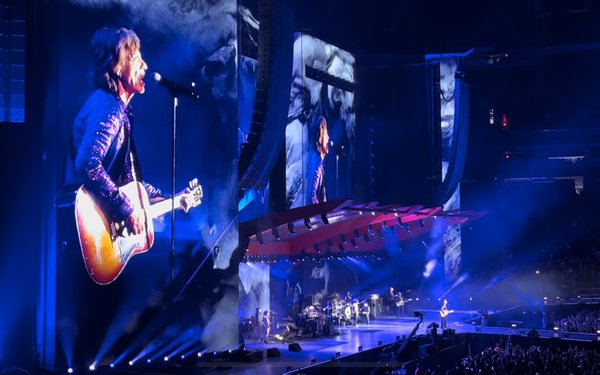 I wouldn’t have changed one minute of my weekend off spent listening to music with friends.

I'm not sure whether you missed me on Friday, but I took the day off to fly to Las Vegas. And while Las Vegas is probably one of my least favorite cities in the United States, it played host on Saturday night to The Rolling Stones at the newly built Allegiant Stadium.

For those who know me well, I’m a music junkie. My first career path as a disc jockey got sidetracked in late 1970s, when I realized I am not a talker, but rather a writer. I live in my head. So instead of spinning records, at the time, I moved to a behind-the-scenes profession.

I’ve seen hundreds of live musical performances, from The Who to George Harrison, and Garth Brooks, but I have never seen a musician marketing powerhouse like The Rolling Stones. Not that they need to market anything, including their brand, but it's interesting to see the progress they made with adapting to online.

There’s always merchandise to buy, but this year, prior to each night’s concert, the group took to Facebook to ask fans attending the night’s concert to vote on their favorite song to play for the night.

Fans were given a choice of several songs to help shape the Rolling Stones musical set list on the No Filter Tour 2021 by voting for the songs the band should play. That vote also gave fans a way to enter a competition to win a personalized video message from a member of the band.

Fans vote for the song and then signs up to win the personalized message, which creates an email list for future marketing.

At the concert, the band played the song that received the most votes. Ruby Tuesday won the Las Vegas night. Each concert night differed.

Ronnie Wood, who is also a painter, has been writing out the musical set list prior to each show. Recently, Wood decided to sell those set lists, creating an email list newsletter that is sent to all those who sign up each time a new list or piece of merchandise is posted.

Since performance marketers pay for successful transactions, most brands find target audiences who are active on social media platforms, which leads to sign-up for email marketing or visits to the brand’s website.

Social media is where people go to share information, and where brands collect information about the consumer or fan.

In 2018, The Information ran a poll that determined The Rolling Stones "tongue and lip" logo is the most iconic logo and T-shirt design of all time. It was created in the 1970s and was said by designer John Pasche to resemble Mick Jagger’s own lips and capture the band’s rebellious spirit.

The Rolling Stones, with their roots in rhythm and blues, are the oldest performing rock band in musical history. They started in London in 1962, and have been commercially successful for more than 50 years. The original lineup consisted of singer Mick Jagger, guitarist Keith Richards, and drummer Charlie Watts. Watts passed away at the age o f 80 in 2021.