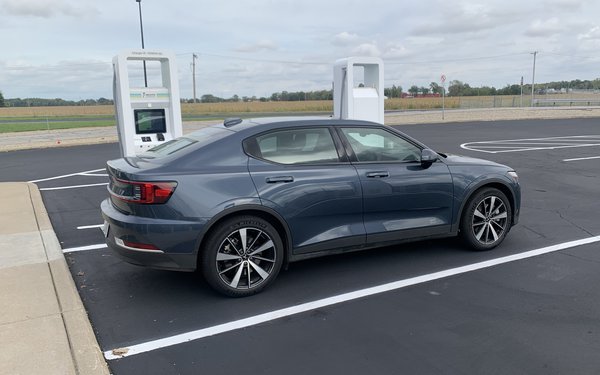 With the electric vehicle category beginning to crowd a bit, automakers are wise to offer a point of distinction.

Enter the Polestar 2, which features simple yet elegant styling along with an impressive EPA range (265 miles), considerable power (408 hp) and built-in Google Assistant to handle any silly question that pops into your head without taking your eyes off the road.

The Polestar 2 operating system runs a range of Google apps and services. And some in-car apps are specifically developed to communicate with Polestar systems and software.

I was offered a weekend loan of the all-electric vehicle and decided to really put it to the test with a road trip from Detroit to Akron, Ohio, which is about 200 miles.

The last time I had some time in a so-called “pure electric” vehicle, which was the Nissan Leaf in August 2019, I experienced some pretty serious “range anxiety” and didn’t really go anywhere beyond the metro Detroit area. So I was curious to see if charging times and infrastructure had improved.

First up: booking a hotel in Akron with electric chargers. Sadly, there still aren’t a whole lot of options, which is astounding. Every single hotel in the country ought to have electric chargers, free or otherwise.

I called the Sheraton Suites ahead of time to make sure the two non-Tesla chargers were functioning properly, since I’ve had previous encounters with broken chargers. The various charging apps, including ChargePoint, assured me these were working, as did the front desk employee.

Of course finding an in-service charger is only half the battle. Getting access to it if it’s blocked by non-electric, internal combustion engine-powered vehicles is another story. Deemed “ICEholes,” they are the bane of existence to the EV ownership experience. There are even articles about how to deal with them.

Not surprisingly, every state deals with the scofflaws in a different way, ranging from not offering any solution to the problem, to ticketing and towing. Ohio is a hands-off state, meaning if I’d been blocked from using the chargers, I had no recourse other then to complain to the hotel or block the driver in so I could plug in and charge (not something I was looking forward to doing.)

Thankfully, the spot was clear when I arrived at the hotel Friday night. I wasn’t on “electric fumes” because I had stopped midway for a quick charge at the prompting of the vehicle, which told me I would not likely make it to my destination with the amount of juice my vehicle currently had.

It’s a handy feature from the Polestar that goes a long way toward quelling range anxiety. A list of charging spots along the route not only tells how far off the route they are, but what level of charge they offer, and how long it would take to “fill up.”

Unfortunately, there are only two service plazas along the entire Ohio Turnpike tht have chargers. I would say that's a huge fail, except that when I used one of the four available at the Genoa stop on my way home, I was the only one plugged in.

The valets at the hotel were quick to point out where the charging stations were, which was in the valet area, as it turned out, which worked to my advantage in terms of access. One of them oohed and ahhhed over the vehicle for an extended time, asking me a dozen questions about it, since it was the first time he’d seen one “in the wild.”

Indeed, the $38,400 vehicle (after federal tax credits) is still not commonly seen, especially not in the Midwest.

On Sunday morning as I was leaving the hotel, I noticed every single charging station besides mine and one other was occupied by an ICE driver. A Tesla owner was using one of those stations and happened to come out before I left. He said it’s a common problem.

Despite all the advantages of driving an EV, particularly one as comfortable as the Polestar 2, I’m not sure I’m personally ready to deal with that trepidation on a regular basis. At least not as long as I’m living in the Midwest, much of which still has fewer charging stations than the coastal cities.

So while the infrastructure has improved, with more charging stations, the common courtesy of other drivers has declined. With any luck, more states will adopt harsher penalties for the scofflaws, which is probably the only way to get ICE folks to play nice.