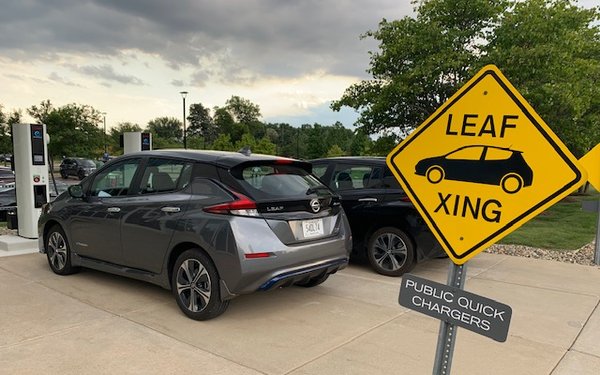 Fast charging at the Level 3 charger at the Nissan Technical Center in Farmington Hills, Mich.

After spending a week dealing with charge and range anxiety, I have a new appreciation for the lifestyle adaptations having a full-electric vehicle require. It’s not so much the vehicles as it is the lack of a charge-friendly infrastructure, at least in the Detroit area.

The 2019 Nissan Leaf SV Plus is attractive and comfortable and has all the newest safety technology including lane-keeping (which Nissan calls ProPilot Assist) and adaptive cruise control. The 214-horsepower electric motor is peppy and offers lots of torque while merging and passing. It has a 215 miles range when fully charged, which is a huge increase from previous all-electric vehicles.

However, you can’t ignore the need to plug in on a very regular basis, particularly if you don’t have access to a high-speed Level 3 charging station. There are still relatively few in the Metro Detroit area. Most stations are Level 2, which offer a significantly slower charge.

Homeowners must pay to put in a Level 2, 220-volt charger. If you are using a standard 110-volt outlet, the amount of charge you get even in a 12-hour “overnight” period is laughable. And good luck if you have evening plans and aren’t able to get the vehicle on the charger until later.

Which makes the news that General Motors and Volkswagen are saying goodbye to hybrid vehicles in favor of concentrating on full electric vehicles very curious. “GM plans to launch 20 fully electric vehicles worldwide in the next four years, including plug-in models in the U.S. for the Chevy and Cadillac brands,” according to The Wall Street Journal. “Volkswagen has committed billions to producing more battery-powered models, including introducing a small plug-in SUV in the U.S. next year and an electric version of its minibus around 2022.”

In researching charging options, I found that a fellow Detroit automotive journalist, Henry Payne, had similar problems when test-driving the Jaguar I-Pace last fall. Like Payne, I spent much of the week plotting out where I could charge while I was out and about. I work from home so don’t have access to a parking garage with a Level 2 charger unless I camp out in the car or in a nearby store or shop. Nissan says getting a full charge on Level 2 charger takes 11 hours, while it takes 35 hours-plus on a 110 volt. I think those figures are generous, based on my firsthand experience.

I finally got aggravated enough midweek with the low and slow charge that I was getting at home on my 110-volt and elsewhere on Level 2 chargers that I made the 62-mile round-trip drive to the Nissan Technical Center to use one of the few Level 3 “fast” chargers in the area, which also happens to be free. My alternative was to drive to one of a half-dozen Dunkin’ Donuts in the area and pay $21 an hour. It took two full hours to fully charge the Leaf, so I saved $42 by driving to the Tech Center. That’s about what a tank of gas currently costs for my mid-size sport utility, and my mileage for a tank is almost double the 215 miles from a full charge on the Leaf. Obviously, it takes considerably less time to fill up a tank of gas than it does to charge my car, even on a quick charger.

Last night, I drove to Cracker Barrel because I’d heard that the locations in Tennessee near Nissan’s North American headquarters all had Level 2 chargers. The two charging apps I’ve been consulting, ChargeHub and ChargePoint, did not show one at the restaurant, but I thought it was worth checking out (plus my stomach needed a refill and biscuits sounded good). No dice at my local Cracker Barrel. It must be a Tennessee thing.

Afterward, instead of grocery shopping at the Meijer right next door which has no chargers, I drove 15 minutes out of my way to another Meijer that had Level 2 chargers on the ChargePoint system, which Nissan had provided an account card to access.  I shopped for an hour while the car charged a whopping 10%, which would have set me back $17.68 if I’d been paying out of pocket and not using the ChargePoint account. Suddenly the $42 for a full charge at Dunkin’ Donuts doesn’t sound so bad, if indeed that's an accurate price.

Other states, California in particular, have a plethora of charging stations. But it’s still time-consuming and costly and you have to plan your life around it.

I think about putting fuel in my non-electric vehicle about once every 10 days. I can take a cross-country -- make that a cross-state -- road trip without having to build in downtime to charge.

It’s clearly going to be a while before full-electric cars are practical and convenient.