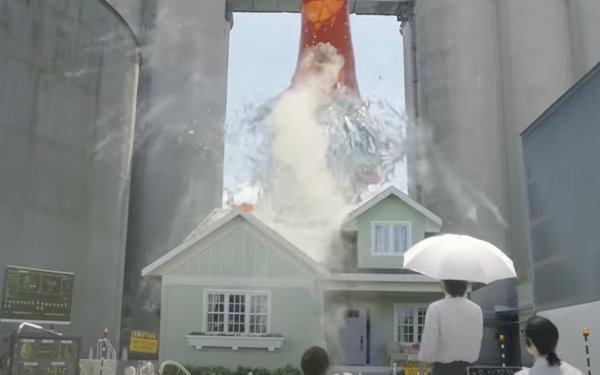 Sometimes you have to create disasters to show how they can get cleaned up.

That’s the gist of a new campaign dubbed “There’s A Pro For That” for residential- and commercial-property damage restoration provider Servpro that combines computer-generated imagery with real-life action.

Shot in an abandoned factory in Los Angeles, this spot from The Buntin Group shows a CGI-rendered helicopter carrying a giant water balloon hovering over a small home.

When someone on the ground fires a projectile, the balloon bursts and floods the home—shattering windows and damaging ceilings and walls before Servpro workers arrive to begin their work.

In a second spot, CGI is employed to mimic a jet engine positioned outside of a hair salon. Once fired up, the engine blasts the building as though it was hit by a tornado.

While the campaign retains Servpro’s iconic “Like It Never Even Happened” tagline, it includes a logo refresh and upgrades to the company’s website to make it easier for people to reach more than 1,900 franchisees.

“More than half of our traffic was coming from people on phones—so it needed to be more capable in a mobile environment,” CMO Mike Stahl says of the website. “People are coming to our website when something bad has happened to them. We improved our technology set we can identify the user issue and get them in touch with the local Servpro franchise immediately, rather than having to take a couple of steps to do so.”

Given the way Servpro is reimbursed for its services, Test Director Rick is akin to Progressive Insurance’s Flo, State Farm’s Jake and Geico’s Gekko characters.

“We’re essentially in the insurance space,” says Stahl. “Most of our work is insured by homeowners insurance or commercial property insurance.”

The campaign is running on national cable television along with streaming video and social media platforms.

Servpro was founded as a family-owned painting business in 1967 that subsequently expanded to cleaning and restoration—selling its first franchise in 1969.

In March of 2019, investment firm Blackstone acquired a majority stake in Servpro as part of Blackstone’s long-term portfolio.
insurance
Next story loading