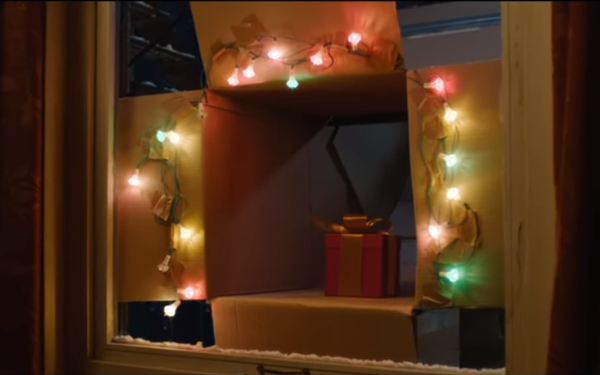 Coca-Cola has unveiled its first “Real Magic” Christmas ad, a celebration of neighbors coming together, with the help of cardboard boxes.

The ad, via  dentsumcgarrybowen London, tells the story of a woman and her young son moving into a new apartment. Initially, other neighbors view her warily, but then the boy gets the idea to tape boxes together throughout the building in what looks like heating ducts.

Soon, as neighbors help out, there is a large line of cardboard-boxes running through the building. The boxes catch the eye of a building superintendent, who triumphantly brings a box to the roof, where dozens of residents are gathered.

The camera then pans back to show that the line of boxes now has lights hanging from it.

The next morning, we see that residents are getting presents. An older Asian neighbor, who viewed the family with suspicion, smiles when she opens a box. The note inside the box reads, “Join us 1 p.m.”

The next shot is of a bunch of neighbors sitting around a table with the caption, “The holidays are magic when we share them.” The final shot is of the boy at the table conversing with the Asian woman.

Coca-Cola introduced the Real Magic “global brand philosophy and platform” in late September. It is the first new global brand platform for Coke since 2016. The previous tagline was “Taste the Feeling.” At the time, the pitch was very gamer-focused. There was a collaboration with Twitch in which creators on the platform unlocked 10 codes during livestreams on their Twitch channels.

The new ad comes as there has been a 22% decline in Classic Coke sales over the past decade.