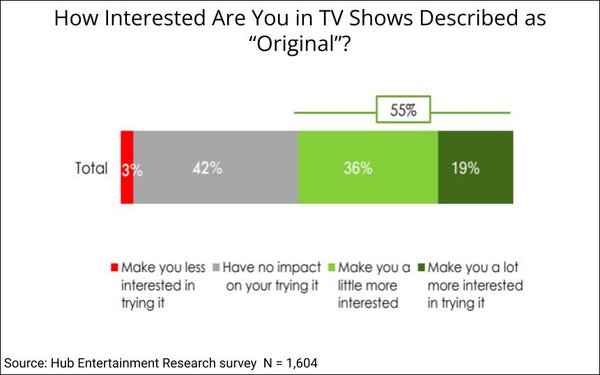 This marks the first time that a majority have reported watching FAST since Hub Entertainment Research began tracking content discovery and platform usage patterns in 2013 — and it’s up 11 percentage points from 2020 and 15 points from 2019.

Also, while 46% of FAST users say they sometimes surf the services with no particular destination in mind, most say that they have a specific show in mind more than half of the time that they  go to an ad-supported service.

This year’s “Conquering Content” study — conducted in October among 1,604 U.S. consumers ages 16 to 74 who have broadband and watch at least one hour of TV per week — also brought good news on the original content and paid streaming services retention front.

More than half (55%) say that they are more interested in TV shows promoted as “original" (chart at top of page).

Fully 40% confirm  they’ve signed up for a streaming service just to watch one specific show not available elsewhere — up from 34% in 2020.

And although younger viewers, in particular, have often been reported to drop services as soon as a desired series ends, this survey found an impressive 77% of those motivated to sign up by a specific show reporting that they kept the service subscriptions after the show ended.

“Netflix knew what it was doing back in 2013 when it prominently branded 'House of Cards' as a ‘Netflix Original,’” said Peter Fondulas, principal at Hub and co-author of the study.

However, it is still unclear whether viewers “will similarly embrace” original content now being offered by some FASTs, including The Roku Channel, or “whether those services are fated to be forever associated with older, nostalgia-friendly content,” Fondulas adds.

What is certain is streaming’s advantage as the home for favorite shows continues to grow.

The proportion of consumers discovering a new favorite show via streaming has increased every year since Hub began tracking, and consumers are now three times as likely to discover a new show via a streamed/online source than through traditional live TV, DVR or video-on-demand via a set-top box. Five years ago, the behaviors were still about evenly split. 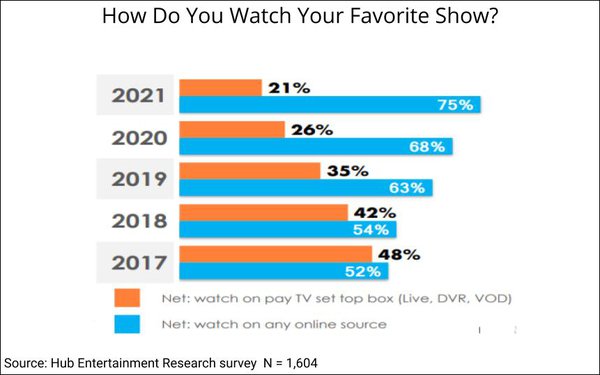 The not-so-great news for Netflix: While 35% of viewers still name it as the source of their most recently “discovered” favorite TV show, that’s down from a peak of 38% last year. 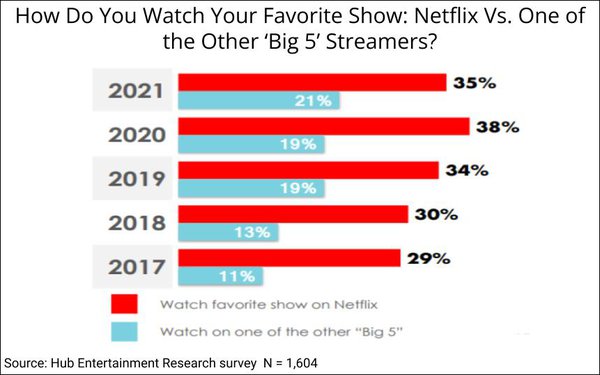