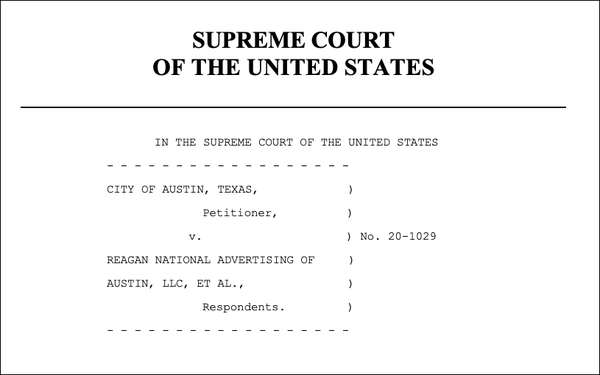 An Austin, Texas ordinance that only allows digital billboards on an advertiser's premises doesn't “skew the marketplace for speech or suppress any ideas,” a lawyer for the city told the Supreme Court this week.

“The off-premises rule is an empty vessel that applies to all subjects and topics,” attorney Michael Dreeben told the judges. “It turns on the relationship of a sign to its location, not the content of its message.”

The city is asking the Supreme Court to reinstate the Austin ordinance, which was struck down last year by the 5th Circuit Court of Appeals.

That court said the law was an unconstitutional content-based restriction on speech, because the only way to know whether a sign was on a company's property was by reading it.

The dispute over the ordinance dates to 2017, when the companies Reagan National Advertising of Texas and Lamar Advantage Outdoor sued the city over its restrictions.

Reagan National and Lamar Advantage -- which want to convert non-digital outdoor ads to digital ones on 83 billboards in Austin -- argued that the distinction on-premises and off-premises digital billboards runs afoul of the First Amendment, which generally restricts the government from regulating speech based on subject matter.

A trial judge upheld the ordinance, but the 5th Circuit Court of Appeals invalidated it.

Austin then appealed to the Supreme Court, which heard arguments for around 90 minutes on Wednesday morning.

At the argument, Dreeben told the judges that numerous cities have passed laws that regulate signs differently depending on whether they're on a company's premises or elsewhere.

He said those cities aren't attempting to suppress speech, but to “have an orderly, organized rule” that can “preserve aesthetic values and avoid visual clutter,” while also avoiding the distraction of “glowing digital billboards.”

Kannon Shanmugam, a lawyer for Reagan National and Lamar Advantage, countered that the regulation “bears no relation to Austin's asserted interests in safety and aesthetics.”

He said: “It verges on the irrational for Austin to permit digital on-premises signs without any limitation but to prohibit the digitization of the small number of grandfathered off-premises signs.”

Shanmugam also defended the 5th Circuit's reasoning that restrictions on signs are “content-based” if officials have to read the sign to determine whether or not it's permissible.

“Bright lines are always attractive to people, but human nature is not bright lines. Life is all gray,” she told Shanmugam. “You have to read things to know anything about them. You have to read a sign to see if it's covered by the First Amendment, and you have to read it to know whether it's obscenity or not.”

Justice Brett Kavanaugh also appeared somewhat skeptical of the ad companies' argument, saying at one point, “I don't want to water down what it means to be content-based.”

He also noted that the decision will have wide-ranging implications.

“Unlike some of our decisions, this decision is going to affect every state and local official around America, and they spend a lot of money and a lot of time trying to figure out how to comply with the First Amendment implications of sign ordinances,” Kavanaugh told Shanmugam.

The dispute drew interest from a wide range of outside groups.

The Out of Home Advertising Association and some other ad groups sided with Reagan National.

Cooke Kelsey, the lawyer who filed the brief for Scenic America, developers and local chambers of commerce, said Thursday he was “cautiously optimistic” that the Supreme Court will reinstate Austin's law.

Kelsey pointed out that several justices noted that numerous jurisdictions with laws regulating signage will be affected by the decision.

He added that the judges “expressed a reasonable concern” for the implications of their ruling.

“They're not considering one law, but thousands of laws,” he said.