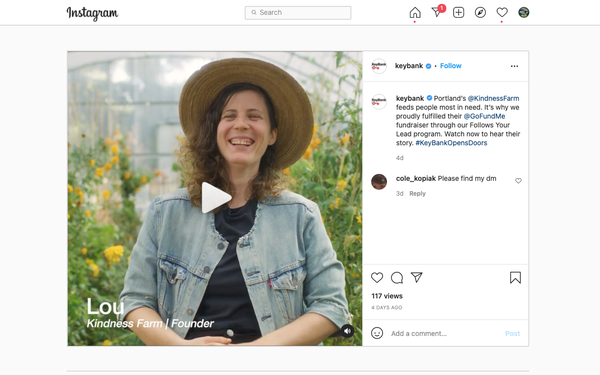 KeyBank is providing assistance to small businesses and community groups, including some that are women- and minority-owned.

The bank is promoting the initiative, “KeyBank Follows Your Lead,” with a social media campaign created by Fallon.

KeyBank has now contributed more than $240,000 and released a Fallon-created video highlighting its partnership with Portland's Kindness Farm.

Fallon, which has been KeyBank’s creative agency of record since 2019, is highlighting KeyBank’s transformative assistance by profiling the individuals, businesses and organizations who are shaping their communities and with whom KeyBank has partnered.

“What better way to be ‘unbank-like’ than by bringing the bank directly to them,” Chase Haviland, account director at Fallon, tells Marketing Daily. “We wanted to continue to show that KeyBank isn’t just defined by the hard work that happens inside its four walls. It’s the impact that Key makes outside of them that really counts.”

The organizations funded by KeyBank range across a wide variety of categories, including farming, restaurants, and arts and culture.

The program is helping organizations reach their funding goals so they can stay afloat in the markets where we live and work, says Kelly Reitnour, senior vice president of sponsorship and field marketing for KeyBank.

“As a result of the pandemic, we’ve seen a large number of small businesses and community groups asking for donations on GoFundMe just so they can remain open,” Reitnour says in a release. “This feels like the kind of work banks can – and should – be doing. It has been really fun and rewarding to surprise recipients with this news, especially on the heels of such a difficult year.”