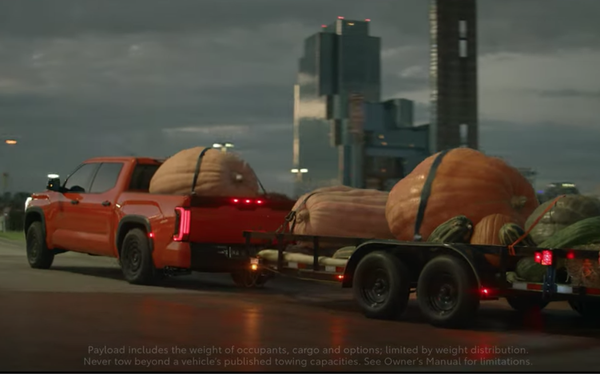 Toyota is targeting Hispanic consumers for its all-new Tundra pickup with an effort that included a donation of fresh produce baskets in Dallas.

The campaign, from Conill, aimed to appeal to Hispanics’ strong sense of community and purpose in life. For Hispanic truck buyers, this sense of purpose is relatable to performance, according to the agency.

The effort includes a video in both English and Spanish showing how the truck has the towing capacity to haul items that no one would ever expect (or believe) it could carry: impossibly oversized vegetables, including a 2,000-pound pumpkin.

Truck fans got a chance to see the all-new Tundra for the first time and learn about its new features. Families visiting the Dallas Farmers Market were in awe, as many walked by asking “are those real pumpkins?,” and wound up posing for pictures with the truck and the giant vegetables.

At the same time, Tundra’s power was matched with the power of giving back, emphasizing Toyota’s continued work to address societal issues, including addressing food inequity in the Dallas metroplex area, according to the agency.