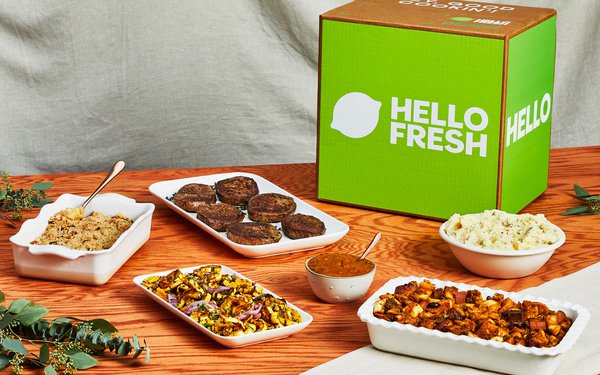 Between unvaccinated relatives, turkey-cooking anxiety  and soaring food prices, America’s stress levels may be headed for a Thanksgiving meltdown. Meal kit companies think they can ease at least some of those fears, offering some of the most elaborate D2C assistance yet.

Cooking a traditional Thanksgiving meal is enough to make even accomplished cooks worry. Butterball’s research has shown up to 80% of millennials fret about how long to cook their bird, and even 43% of experienced cooks aren’t that confident.

COVID concerns are making it worse this year. In September, a Hello Fresh poll of 2,000 consumers found that 53% think holiday stress will be double what it was last year. One in ten say they won’t even celebrate as a result.

So Hello Fresh’s offerings this year aim to make it look easy, with the option of traditional turkey or beef tenderloin and plenty of swanky sides. The turkey package, for instance, costs $170 plus shipping, with enough gravy, mashed potatoes, ciabatta stuffing, squash roasted with walnuts and apple ginger crisp for dessert, to serve between eight and 10 people. It also comes with the option of adding an appetizer -- cranberry brie crostini -- for an additional $20.

Blue Apron is also back in the Thanksgiving business this year, but with more mix-and-match items to accommodate smaller feasts, people who are traveling, and vegetarians.

Those wanting to spend more can choose Harry & David, at $230, go vegetarian at Purple Carrot, or make healthier choices at Sun Basket.

But for many, those prices may feel increasingly out of reach, especially if they’ve been following the onslaught of headlines outlining the impact of inflation and the rising costs of food.

As convenient as they are, these meal kits are miles away from the reality most families face. Last year, the American Farm Bureau Federation calculated the cost of a Thanksgiving feast for 10 people at $47, or less than $5 per person.

That group is expected to announce typical costs for this year next week. In a conference call for reporters, Farm Bureau economist Roger Cryan says food prices are up about 4.6% this year, the most significant increase in 30 years. Gains vary by type, with vegetable prices rising just 1% and beef increasing by between 6% and 7%.

All those price increases are weighing on people. A new survey from Lending Tree reports that 48% of consumers say they dread the holidays and the expenses that come with them. And 13% say they are specifically anxious about Thanksgiving.