Lance Krall Jumps To Dagger And Out Of His Comfort Zone 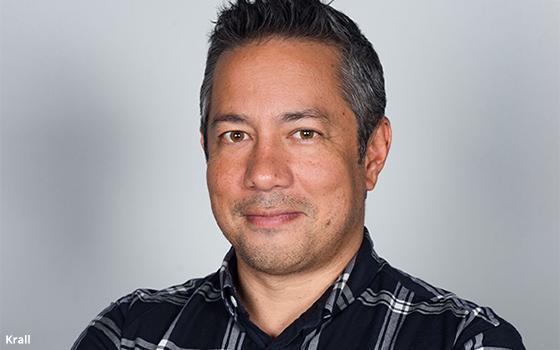 There aren’t many ad agency execs that have had their own TV shows, but Atlanta’s Dagger has recently hired a guy who appeared on "The Office" (as Dwight’s taekwondo instructor Sensei Ira Glicksberg) and on "The Goldbergs," "Monk," "Free Radio" and other shows. He was also the star of his own show, "The Lance Krall Show," on Spike TV. For the last few years, Krall has been running his own TV development company called Picture It, where he has developed projects for Jerry Bruckheimer, Doug Robinson, Laurence Fishburne and Kevin Hart.

Mediapost talked with Krall recently about his new job (VP, group creative director) and where he sees advertising going in the next few years. Below are excerpts of the conversation with Krall and Dagger Chief Creative Officer Al Patton:

MediaPost: What do most TV shows about advertising, like "Mad Men," etc. get wrong about the business and what do they get right?

Lance Krall: Ah, well, given that this is week two or week three of my employment here, I wouldn't be able to give you a super accurate answer. When I started my job here, my dad asked me how many suits I was buying. I was like “I don't think that's how it works anymore.” Like now, we [wear] tennis shoes and cool jeans. So what other TV shows are about the advertising industry? Other than "Mad Men" or "Bewitched"?

Al Patton: There was a show called "Trust Me" about two guys, they were an art director/copywriter team. The other one the agency points to is remember "Thirtysomething."

Krall: If I had to say just for my short time here, I’d say "Bewitched" gets it more right than "Mad Men."

MP: Have you always been interested in advertising, and why did you decide to go into advertising now?

Krall: I actually went to college to get a marketing major. Because I was interested in the ad world but then my senior year I got, I guess disillusioned with the class that I was in, I just did not like any anyone in my actual physical class and went well, if my class is what the advertising world's going be like, I don't want anything to do with it, which was really a dumb decision.

But I also met a friend of mine who got me into film and theater. And I decided to change my major to film and retake my entire core and spent another three years in college, but it definitely was always something that I was attracted to and interested in and something that I always enjoyed. And really, at the end of the day, storytelling and me writing scripts for TV or writing scripts for ads, ultimately, it's all about finding authenticity and shared experiences and relatable moments and being able to understand what the target is, and what kind of story you're trying to tell.

MP: What do you think, of the current environment, where there's a lot of experimentation, seen in efforts by brands and shows? Which efforts have been successful, and why were they successful?

Krall: Well, I will say, from my point of view, I had a TV show called "Free Radio" that later aired on Comedy Central, and we had to do brand integration for Wii and Burger King. And I remember, it'd be my TV show, and maybe an actor on it, and a writer and producer on the show, I was really adamant about the fact that I wanted to make sure that it didn't just feel like a commercial in the middle of a storyline. And that it really blended well into the story. And we spent a lot of time, probably more time on that than we did on the actual writing questions for the guests that I had on the show, just making sure that it blended in organically into the story that I think you can see when there's brand integration in shows where it just feels seamless. And then there's other times you're like, Oh, God, that's really an obvious like, it takes you out of the moment. And those are the times where I don't think it's as effective.

MP: A lot of people talk about "30 Rock" being successful at brand integration.

Krall: They leaned into it. I mean, that was part of the tone of that show, the part of what was so delightful about that show was that they would wink at the audience a lot. And that I think that gave them a lot of leeway to sort of just go, here's a better show. But that totally made sense for that show. There are other shows that, there isn't breaking that fourth wall where you're like it's a tightrope walk.

MP: And what attracts you about advertising right now? Why do you want to be part of it?

Krall:  I've been in the entertainment industry for more than 20 years, and I've always sought ways to make myself uncomfortable. I'm always trying to find new ways to challenge myself. And I went to Hollywood as an actor, but then very quickly, threw myself into writing and then producing and writing on television and writing [for] features, decided to come out to Atlanta to start a TV development company. And I'm always looking to sort of grow into.. I don't like to be comfortable. That's just part of this not even really something I consciously do, which is sort of my personality type.

And I think during the pandemic, like it did with everyone else in the world, it made me sort of reflect and I realized that I've been in this industry for a really long time, and I kind of wanted to change, and then sort of just through serendipity fate would have it. Al called me. And we had lunch, and he discussed me working for Dagger, and he started to explain the ad world to me and what I would be doing and how my perspective…the fact that I wasn't a traditional ad man coming into this world would be a benefit, a plus. And it got me excited, I got to go out of my comfort zone and get challenged in a new way. And it excited me to go into a company where they wanted someone that was outside of their comfort zone, and they wanted to be challenged in a new way. So it just felt like a really good fit.

MP: The advertising scene in 2021 is very different from what was even 10 years ago. How you see it evolving over the next decade or so?

Patton: Yeah, and just to, just to tack on to that, you know, I think, as, you know, ways are found for ads to become more and more invisible, like the industry, it's on the industry to find ways for brands to become more visible. And, you know, the lines just keep blurring between advertising and entertainment, and sports and content, and everything is becoming a little bit more sort of intermingled with each other. I think it's [up to] an agency to figure out places where brands can be relevant. I think you need people that come at it from different angles, than what the ad industry has traditionally done. So that's a big part of Lance being here.